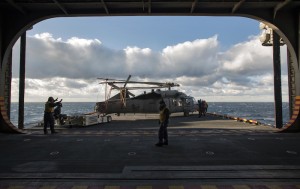 Post traumatic stress disorder in veterans comes in many forms, whether it stems from combat missions, sexual trauma, feeling alone or worrying about family. Now more and more women are showing signs of the disorder In fact, 20 percent of female vets have been formally diagnosed. | NBC 9 West Texas >>

Robert Newman, a retired New York City firefighter who spent 40 years with the department, died last week from a cancer he developed while working at the World Trade Center site after the 9/11 terrorist attack. He was 70. | New York Daily News >>

Dr. David Shulkin was sworn in Tuesday as secretary of the Veterans Affairs Department and immediately was urged to begin approving thousands of exemptions to President Donald Trump’s federal hiring freeze. | Military.com >>

The United Nations said Wednesday it was temporarily pausing aid operations to neighborhoods in the eastern half of the Iraqi city of Mosul as attacks by the Islamic State group continue to inflict heavy civilian casualties there. Lise Grande, the U.N. Humanitarian Coordinator for Iraq, said U.N. agencies “made the decision that until security improves, it will be difficult for us to provide assistance.” | Bloomberg >>

Gunmen in Afghanistan kidnapped 52 farmers on Wednesday, most of them members of the minority Uzbek community in the remote northern province of Jowzjan, regional officials said, but the motive for the abductions was not immediately clear. Afghanistan’s once-stable north has become a hotbed of kidnappings and shootings in recent years, as the militant Taliban gains ground, along with small groups loyal to Islamic State, mostly defectors from the Afghan and Pakistani Taliban. | Reuters >>

A suicide bomber detonated an explosives-laden vehicle in a Shiite majority neighbourhood of Baghdad on Wednesday, killing at least nine people, an interior ministry official said. Thirty others were wounded in the explosion in the Habibiya area, near the vast district of Sadr City in northern Baghdad, the official said. | Yahoo News >>

Five hundred U.S. troops began to arrive in a Romanian Black Sea port with tanks and hardware to bolster defense in this East European NATO nation. The U.S. embassy said the “Fighting Eagles,” 1st Battalion, 8th Infantry Regiment, will be stationed in the Mihail Kogalniceanu air base in eastern Romania, on a rotational basis. | The Army Times >>

The U.S. Coast Guard said it is tracking the ship’s course, but would not disclose the precise location. “The U.S. Coast Guard is aware of a Russian Federation-flagged vessel transiting international waters off the East coast of the United States, as we are of all vessels approaching the U.S. The ship has not entered U.S. territorial waters, which extend 12 miles out to sea,” the Coast Guard said in a statement. | The Hartford Courant >>

A coffee brand founded and operated by veterans is supporting those who put their lives on the line daily. For the next month, if you purchase coffee from Fire Department Coffee, the company will donate 10 percent of its proceeds to the Paddy Brown Program. | CBS Detroit >>

The Sergeant First Class in the Minnesota National Guard served his country in Iraq. Eric asked William questions only a soldier would know. William answered them all and pulled out his military papers and VA medical card to offer further proof. What William didn’t know, at the time, is that Eric isn’t just a Wild season ticket holder and a war veteran. “He’s a cop!” William now laughs. | NBC 11 Minneapolis >>

Jorge Brooks said he never imagined he would be assisting with saving someone’s life outside of the military. Brooks was on his way to the Greater Faith Baptist Church Child Development Center for his class clinical at approximately 8 a.m. on Feb. 13. As he checked his rear-view window, he saw what appeared to be a car “flying across the road,” he said. | The Times and Democrat >>