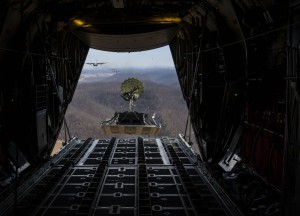 The VA must receive congressional approval to lease medical facilities with annual rent payments totaling more than $1 million, according to federal law. Combined, the 24 facilities — most of them outpatient clinics — would cost about $228 million during the lease periods, which in some cases can last 20 years. | Military.com >>

Peter Kauffmann, a Navy veteran and vice chair of VoteVets, said in a Monday press release that the organization chose to air the message on TV because “the White House comment line is down and Donald Trump hasn’t set up that veterans hotline he promised.” The point of the ad, the release explains, was “to get in front of [Trump’s] face.” | The Huffington Post >>

Benjamin Studley, a 37-year-old Navy veteran and former Machias Elementary Bobcat, was on a mission when he visited his alma mater Thursday. As Liv, her classmates and other students created cards, Studley made his rounds at the Snohomish district school. He was there as part of a Valentines for Veterans effort. | Herald Net >>

Dilbireen Muhsin, a 2-year-old Iraqi Yazidi boy whose family fled a genocide perpetrated by the Islamic State a few years ago, has been without his parents for more than three months. The toddler has been living in Michigan with a woman who had agreed to take care of him while his parents were in Iraq, unable to come to the United States. | The Washington Post >>

Afghan officials and local residents said Sunday that 22 civilians, mostly women and children, were killed during a joint operation carried out by U.S. and Afghan forces last week in the southern Helmand province. The presidential envoy for security in Helmand, Jabar Qahraman, said the raid against Taliban insurgents in the Sangin district killed 13 people from one family and nine from another. | CBS News >>

Two rockets landed in Baghdad’s highly fortified Green Zone last night following clashes at anti-government protests that left five dead, according to Iraqi security and hospital officials. The rocket attack left no casualties as the munitions landed on the parade grounds in the center of the highly fortified Baghdad compound that is home to Iraq’s government and most foreign embassies. | The Boston Herald >>

The Army plans to spend $300 million in a blitz of bonuses and advertising over the next eight months to recruit 6,000 additional soldiers it needs to fill out its ranks. Legislation approved by Congress and signed late last year by former president Barack Obama halted a years-long drawdown of U.S. troops. | USA Today >>

Retired Lt. Gen. Harry Raduege who has advised the Obama and Trump administrations says the time is right for Congress and the military to advance their cybersecurity efforts. Raguege headed the Pentagon’s Defense Information Systems agency before he left the service in 2005 He’s now director for cyber risk services at consulting giant Deloitte. | Stripes Okinawa >>

The freedom of navigation operations, also known as FONOPS, could be carried out by ships with the San Diego-based Carl Vinson carrier strike group, which is in the Pacific Ocean heading toward the South China Sea, according to three defense officials who spoke to Navy Times on condition of anonymity to discuss operations in the planning phase. | Navy Times >>

“Upon leaving the military, it is difficult for veterans to transition back to civilian life, which is something WFM helps with in two primary ways,” Robert Blanton, CEO of Warfighter Made, said. Warfighter Made first concentrates on camaraderie, being a part of a team again and working together to create something holistic and useful for catastrophically wounded war fighters. Both parties contribute: the vets helping and the vets receiving help. | Valley News >>

He wasn’t in Massachusetts when the Patriots beat the Seattle Seahawks in Super Bowl XLIX in 2015. He wasn’t going to miss his chance to see the trophy this time around. “I’ve been traveling all over the country in the Marine Corps, so this was the first time I was home for a trophy viewing. It was very, very special for me and it was just an incredible experience,” he said. | The Scituate Mariner >>

Ms. Eason, who specialized in administration and personnel records, said she has not always been proud of her service, due to her background as a teenage rebel upon entering the Marines. Her father had served in the Korean War, but never spoke of his experiences, further augmenting the “void” she felt in the black veteran narrative.To combat her father’s unwillingness to share, Ms. Eason now regularly visits Bethel Park School District, where her daughter studies, to discuss her positive experience in the military.| Pittsburgh Post-Gazette >>