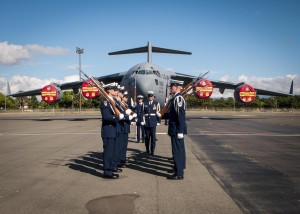 “Whether it is unreasonable wait times at multiple facilities, the widespread over-prescription of highly addictive opioids, veteran suicides, misconduct by VA management, or retaliation against whistleblowers, it is clear not all veterans are receiving the high-quality care they deserve,” they wrote. | USA Today >>

The president has signed into law a bill that hopes to decrease wait times at veterans’ affairs hospitals across the country. Iowa Senator Joni Ernst co-sponsored the Faster Care for Veterans Act. A June 2014 Department of Veterans Affairs audit showed more than 120,000 veterans waited at least 90 days for appointments. | KCRG >>

Using the ID.me system, users are verified as having a military connection and can then post items for sale. Verified military-affiliated shoppers located near them can connect with sellers through the app and complete the transaction through a secure system. ReSupply then charges a transaction fee. | Military.com >>

The Hashed al-Jabour militia, made up of Sunni tribal fighters and members of the Popular Mobilization Forces, killed four men it had captured in a village north of Mosul in November, according to a report published Sunday from New York-based Human Rights Watch. The report said witnesses to the incident said the men were shot in the presence of Iraqi security forces without any judicial proceedings. | Fox News >>

At least 14 people have been killed after a bus collided with a fuel tanker on a motorway in western Afghanistan, officials say. More than 40 others were injured in the accident on Sunday, said Mohammad Naser Mehri, a spokesman for the governor of Farah province. | BBC >>

The US “got it wrong” about Saddam Hussein and Iraq, the CIA analyst who interrogated the former dictator has said. John Nixon had numerous conversations with the deposed leader and now says that America was critically mistaken about their intervention Iraq in a number of ways. | The Independent >>

Swift and organized is exactly what the U.S. and Kuwaitis wanted as they proceeded last week with their first combined joint live fire exercise in six years — unofficially called Operation Lightning Eagle — involving the U.S. Army and the Kuwaiti army and air force. This level of integration is what U.S. Army Central Command, or ARCENT, is looking for with all of its partnerships in the Middle East. | Military.com >>

China says its military seized a U.S. Navy unmanned underwater glider in the South China Sea but it will give the drone back. But President-elect Donald Trump says the Chinese government should be told “we don’t want the drone they stole back” and “let them keep it!” | CNBC >>

Tucked into the annual defense authorization bill — expected to become law in coming days — is a provision requiring the Defense Secretary and Internal Revenue Service Commissioner to post online all of the costs, “including the relevant legacy costs, to each American taxpayer of each of the wars in Afghanistan, Iraq, and Syria.” | Military Times >>

There’s a new way for veterans to serve their country as one school district actively recruits them as teachers. | NBC News >>

To most people, the animals in veteran Tice Ridley’s menagerie look like they’re living a comfortable life of leisure. But the five goats, two alpacas, two rabbits, potbellied pig, cat, guinea pig, dog and five horses (including two miniature horses) play critical roles in helping veterans, along with first responders and their families, heal from the wounds of war. Ridley, 44, a retired major and decorated Army war veteran who served for 18 years, calls this endeavor the Circle of Veterans and Families, and its mission is “to keep soldiers alive and families together. | TODAY >>

“It’s a way of calming yourself, an outlet so to speak,” Smith said as a fiddler and a piano player warmed up behind him. “We have a lot of things that we do as far as prescription drugs, but this right here is the best prescription I’ve had, (with) no side effects.” The Veterans Administration says between 10 and 20 percent of war veterans going back to the Vietnam era are living with PTSD.| Fox News >>