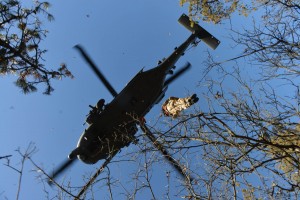 Lawmakers passed a veterans omnibus bill in the waning hours of Congress’ legislative session last week, but without many of the most sweeping and controversial provisions the two chambers had struggled with in recent months. Instead, the measure heading to the president’s desk is a collection of mostly non-controversial items, including small changes in the benefits appeals process, an extension of education benefits to some war widows, and increased access to benefits for homeless veterans. | Military Times >>

U.S. Sens. Joni Ernst, R-Iowa, and Amy Klobuchar, D-Minn., announced on Monday that a bipartisan bill to streamline the process for health-care appointments for veterans, the Faster Care for Veterans Act, had passed both houses of Congress and is heading to the president’s desk. The bill would direct the U.S. Department of Veterans Affairs to create a web-based program to allow veterans to schedule and confirm health-care appointments for VA medical services. | The Daily Iowan >>

The U.N. children’s agency said Tuesday that about 35,000 children have fled from Mosul since Iraqi forces and a U.S.-led coalition launched a massive operation in mid-October to retake the city from the Islamic State group. Iraqi special forces meanwhile pushed deeper into the city’s eastern part, retaking the Falah neighboring late Monday, said Lt. Gen. Abdul-Wahab al-Saadi. Fighting raged as a haze of fog and smoke hovered over the city, which was rocked by tank fire and airstrikes. | The New York Times >>

An Afghan official says that at least two Afghan police officers have been killed when a roadside bomb detonated near their patrol in eastern Kunar province. Abdul Ghani Musamim, spokesman for the provincial governor in Kunar, said on Tuesday that the explosion killed Abdul Wali Khan, a unit commander for the border police, and his bodyguard. | The Washington Post >>

Before the militants’ takeover, Iraq’s second-largest city was arguably the most multicultural place in the country, with a Sunni Muslim Arab majority but also thriving communities of Kurds, Shiites, Christians and Yazidis. Together, they had created Mosul’s distinct identity, with its own cuisine, intellectual life and economy. But the Islamic State group turned Mosul into a place of literal and spiritual darkness. | The Seattle Times >>

Five Marines aboard an MV-22 Osprey have been have rescued after the tilt-rotor aircraft went down in waters off of Okinawa on Monday night, local time, military officials said. The rescued Marines have been transported to a medical facility for treatment of their injuries, officials said. | ABC News >>

The US Navy is testing the effectiveness of a smartphone app in an attempt to curb military sexual assaults. The app, LiveSafe, is designed to “help sailors with prevention by providing a one-stop shop for all of their needs,” Navy Capt. Charles Marks said in a press release. Marks said the app includes a temporary location-sharing feature, as well as information on emergency services and support centers. | KTLA 5 >>

When Jason No hung up his military fatigues for a civilian career after eight-plus years in the Army, the weekends, he says, “were the worst.” The 35-year-old missed the camaraderie of working with a team. Walking his Makakilo neighborhood as part of his fresh start as a financial planner for Edward Jones, the former cavalry scout says he “just happened to knock on the door of the secretary of the Kāne‘ohe Lions Club, J. C. Kalopodes.” | Honolulu Magazine >>

Veterans and other volunteers are stepping up efforts this month to raise money in hopes of installing a monument to six soldiers with local ties who were killed in terrorist attacks. The city’s 11 veterans’ organizations are focusing on raising money for the monument, which would be erected on Veterans Plaza on Front Street. It will stand with other monuments that honor veterans of the Civil War through the Vietnam War. | Mass Live >>

John Peck was wounded twice serving our country in Iraq and Afghanistan. In 2010, he stepped on an IED. Peck lost both arms and both legs, but not his determination or his sense of humor. Just hours ago, Marine Corps veteran John Peck gained control of his donor’s elbow for the first time. It’s just the latest breakthrough following his remarkable double arm transplant surgery in August. Twelve surgeons at Brigham and Women’s Hospital in Boston worked for 14 hours. When Peck woke, he had arms and his girlfriend Jessica Paker at his side. | News12 Arizona >>