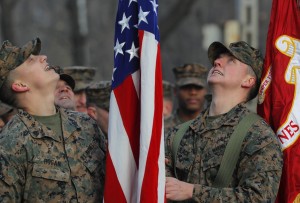 “This transformation has probably gone farther and faster than any I’ve been involved in, but also it’s not yet far enough,” said McDonald, who is preparing to end his tenure leading the department when President-elect Donald Trump takes office next year. | Military Times >>

At a Saturday press conference, Hales and Kafoury said that the partnership between the city, county and non-profit organizations that support the homeless received a letter from the U.S. Interagency Council on Homelessness confirming that Portland successfully went 90 days without a homeless veteran, effectively ending veteran homelessness. | Portland Tribune >>

Lt. Gen. Stephen Townsend told reporters there are still an estimated 3,000 to 5,000 IS fighters defending Mosul. He applauded the efforts of Iraqi security forces, who began their offensive on Oct. 17 in what has been billed a decisive phase of the anti-IS fight. | ABC News >>

Iraq is gradually emerging from a brutal two-year economic downturn, coupled with a bloody conflict with ISIS conflict and still percolating civil strife that has wreaked havoc on its infrastructure and institutions. Last month, one investor told CNBC a full-fledged economic revival would take at least a decade to come to fruition. | CNBC >>

Gilman, a 64-year-old cardiologist, has run several Army hospitals during his 35-year military career, including the Walter Reed Health Care system in Washington and Brooke Army Medical Center and Fort Sam Houston in Texas, according to an NIH news release. In his last post before retiring, he was commanding general of the U.S. Army Medical Research and Materiel Command at Fort Detrick, Md. | Stars and Stripes >>

This season is not an anomaly. The United States Naval Academy may not be Alabama or Michigan, but it plays a serious brand of Division I football. Last year, the Blue and Gold went 11-2, soundly defeating the University of Pittsburgh in the Military Bowl ($1 million payout for each team). In 2014, the team was 8-5, including a one-point victory over San Diego State in the Poinsettia Bowl ($750,000 payout). Its 2013 record was 9-4, with a season-ending win … well, you get the picture. The last time Navy had a losing season was 2011. | The New York Times >>

To counteract this, a Vacuum Spine Board is added on top of the NATO litter. The board provides rigid full-body support for the patient, said Lt. Col. Elena Schlenker, the contingency operations division chief and course director for the Critical Care Air Transport Team. With the new stretcher, it’s one piece of equipment instead of two, which also cuts down on weight.| Air Force Times >>

Kem is one of nearly 400 student veterans who attend Colorado Mesa University. The unique challenges and experiences of veterans like Kem are exactly why Amanda Herron, CMU’s veteran services coordinator, wanted to bring the Peer Advisors for Veteran Education program on campus. | The Durango Herald >>

Goldhaber, the acclaimed NYC jazz singer-songwriter, has himself pledged a whopping 50% of all album sale proceeds to IAVA (Iraq & Afghanistan Veterans of America), which strives to build the “New Greatest Generation” as the first and largest nonprofit, nonpartisan organization for Iraq and Afghanistan veterans. | Broadway World >>