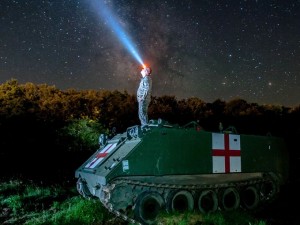 “I kind of felt like an outsider in his life. I guess that’s the best way to say it,” Willy Ethier said, sitting next to her husband of 26 years. “There was that part of his life that I couldn’t get into, and I wanted to be the one that was going to make him better. That’s just natural, if you love somebody.” | Burlington County Times >>

Either way, “It’s absolutely a horror show,” according to Veteran Community Initiatives Director Tom Caulfield. This year VCI plans to make veteran suicides the primary topic of its annual Returning Veteran Issues Symposium. Caulfield described it as a concern that cuts across all demographics of veterans: young, old, male, female, rich, poor. | Stars and Stripes >>

Data on mental health and substance abuse were examined as part of the study, officials wrote, because those diseases are connected with a higher risk of suicide. But the study also found that the suicide rate among VA patients with those disorders decreased from 77.6 per 100,000 to 57 between 2001 and 2014 despite that correlation.| Task and Purpose >>

Just southeast of Mosul, the Dibaga camp for Iraqis displaced from Nineveh province is steadily expanding. In the camp’s center, crowds of angry young men swarm administrative offices demanding proper shelter or permission to leave the camp entirely. In one section separated from the rest of the camp, families call through chain link fences in search of loved ones partitioned by a lengthy interrogation process. | Star Tribune >>

Militants linked to Islamic State have released photos that purport to show weapons and equipment that belonged to American soldiers and were captured by the group in eastern Afghanistan. The photos, which came to light on Saturday, show an American portable rocket launcher, radio, grenades and other gear not commonly used by Afghan troops, as well as close up views of identification cards for a U.S. Army soldier, Specialist Ryan Larson. | Reuters >>

Once feared by Saddam Hussein as a Zionist plot, Pokemon are now popping up in Iraq again. U.S. troops and veterans, among others, have joined in the hunt to “catch ’em all,” even on the front lines of the fight against the Islamic State group. The popular Japanese children’s cartoon about pocket monsters and their human trainers was suspected by Hussein and his security service to be a tool of international Zionism. | Stars and Stripes >>

The White House has released a version of President Obama’s 3-year-old guidance on the use of lethal force against terrorists overseas, laying out what it says are safeguards to minimize civilian deaths and errant strikes while preserving the capability to take quick action with drone attacks and other means. | Military Times >>

Pentagon officials intend to publish a new policy later this year, a document expected to have sweeping effects on how the military defines and measures health and fitness. The review comes amid rising concern about obesity. Among civilians, it is shrinking the pool of qualified prospective recruits. And in the active-duty force, a rising number of overweight troops poses risks to readiness and health care costs. | Military Times >>

For U.S. Army Alaska’s largest exercise in 15 years, the Army called on its “combat training center on wheels” to help. The Hawaii-based Joint Pacific Multinational Readiness Capability is an exportable combat training center capability — a complex system of computers, towers and observer/controller/trainers designed to train brigades at their home stations. | Army Times >>

“We travel almost every weekend with this team and it’s nice to come back home and see the community get together and support a great cause,” said Wounded Warriors second baseman Matias Ferreira, who grew up in Atlanta but lives in Wantagh. Ferreira, who served in the Marine Corps, has full prosthetics below both knees after suffering injuries from an Improvised Explosive Device in Afghanistan. | Newsday >>

Four years later, and after a lot of trial and error, he’d not only perfected the process itself, but customers said it was the best ice cream they’d ever had. As the business and demand grew, Hancock kept tapping into the military surplus market for the needed equipment. “We’ve gotten cryogenic surplus from the Navy and Air Force. We got one tank from Redstone Arsenal.” | Military Times >>

For mom and dad, Julio and Elizabeth Marines, the five children came as a package, sort of an instant family. On July 29, their adoption was finalized and they all became “Marines.” “And, I’m an ex-Marine, too,” Julio said, laughing at the possible confusion resulting from his name and his military service. | Abilene Reporter-News >>