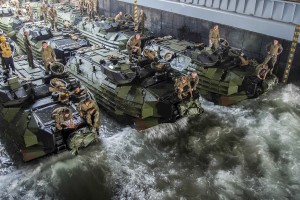 Veterans with mental disorders that prevent them from leaving their homes or moving around may qualify for a service dog under a new Veterans Affairs program introduced this month. VA officials said Tuesday that a Service Dog Benefits pilot will cover the veterinary costs of a service dog for a veteran with a mental health condition that limits their mobility. | Military Times >>

Thompson, a decorated soldier based at Joint Base Lewis-McChord, was assigned to Company A, 3rd Battalion, 1st Special Forces Group (Airborne), the Army said in a news release. Thompson and the Afghan unit that he was advising were on foot patrol when the attack occurred. A second U.S. servicemember and six Afghan soldiers were injured. | Stars and Stripes >>

The Department of Veterans Affairs has no interest or ownership rights to what’s been called a “miracle drug” for curing hepatitis C, the department said on Thursday. Furthermore, the department said Dr. Raymond Schinazi, a former VA researcher officials previously claimed invented the drug alternately known as Sofosbuvir or Sovaldi, did not do so. | Military.com >>

Defense Secretary Ash Carter on Tuesday said he was “deeply saddened” by the death of a U.S. service member while on an advisory mission in southern Afghanistan. “I was deeply saddened to learn one of our service members was killed today and another wounded while engaged in our mission to train, advise and assist Afghan forces,” Carter said in a statement. | The Hill >>

Since the Sept. 11 terrorist attacks, the United States has handed out a vast but persistently uncountable quantity of military firearms to its many battlefield partners in Afghanistan and Iraq. Today the Pentagon has only a partial idea of how many weapons it issued, much less where these weapons are. | The New York Times >>

The American University of Afghanistan in Kabul came under attack today, as security forces exchanged gunfire with the attackers. The gunfire that was reported in the vicinity of the school has now stopped, according to a source in the Kabul Police Force. The same source told ABC News that two people were killed and five were injured in the attack. | ABC News >>

Since 2008, the Navy has allowed O-5s and O-6s with at least 24-months time-in-grade to request a waiver and retire sooner than the 36 months normally required. In addition, the requests no longer need final approval by the chief of naval personnel. The new rules give community managers more leeway to OK routine early retirement requests. | Navy Times >>

The audit, conducted by the Defense Department’s Office of Inspector General, found that the Army erroneously made $2.8 trillion in adjustments in the third quarter of 2015 to its Army general fund – one of the main accounts used to fund the service. The error amount skyrocketed to $6.5 trillion for all of last year, the report said. | CNN >>

U.S. Army soldiers training for future operations have not been able to take full advantage of virtual training devices, a key part of the service’s preparations for the next generation battlefield. The Army has not fully integrated virtual training devices into operational training, which has prevented soldiers from getting the most out of these technologies, according to a report issued by the Government Accountability Office after a year-long audit. | Washington Free Beacon >>

Edinger is a veteran. And that day, he says his army troop had surrounded a town in Afghanistan where they knew someone was making bombs. “Apparently there was more than just a bomb maker there,” Nickolas said. “There were bombs all around the town. People started getting blown up.” | KBOI >>

What we produce here is different, and proven stronger. To pass the standard muster, an armor plate has to withstand a single round from a .30-06 M2AP rifle. Last year, a National Institute of Justice — certified laboratory tested our armor, and it withstood six rounds. That’s a feat most in the industry have never even heard of. | Entrepreneur >>

Unleashed Dog Training in Hubert has been training service dogs for wounded Veterans for years, and lead trainer Casper Vande Hei, a Veteran himself, says since 2009 they’ve trained what amounts to half a million dollars worth of service dogs to local Veterans Onslow County. Kevin Martin, a wounded Veteran, is among those to benefit from the organization. | WITN >>