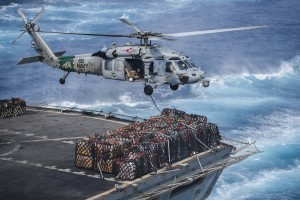 An MH-60S Sea Hawk helicopter delivers cargo to the flight deck of the aircraft carrier Dwight D. Eisenhower during a replenishment-at-sea with the fast-combat support ship USNS Arctic in the Persian Gulf last Friday. | Military Times >>

“While affected veterans are receiving health care, many have lost their homes and their ability to work and financially support themselves because of the disabilities caused by the illnesses they developed from toxic exposure,” the Senators wrote. “Many more are teetering on the brink of losing their homes and bankruptcy. This is not just a North Carolina problem; this is a national problem.” | WWAYTV >>

Defense Department contractors in Afghanistan still outnumber U.S. troops by a 3-to-1 margin according to new research released this week, raising questions again about the role those workers play in the ongoing wars overseas and the oversight they receive. | Military Times >>

Camp Swift has been a cornerstone of the US military’s effort to roll back ISIS’s self-styled caliphate since the base opened last year in northern Iraq. It hosts parts of an infantry brigade combat team that includes infantry and artillery soldiers, engineers, and other U.S. service members. Their mission is to help local forces take the fight to ISIS. | BuzzFeed News >>

It was a cold November afternoon, in 1999; thousands had gathered in Ghazi Stadium in Kabul after the Friday prayers. A mullah stood at the center of the ground and announced the executions of the day. It was a common practice to bring those convicted by the Taliban courts onto the stadium grounds for public executions. With most sporting activities banned under the Taliban regime, soccer fields were used for carrying out capital punishment. | Bustle >>

An estimated 700 to 750 horses roam training lands on and around Fort Polk. The fate of the horses has been the subject of debate since the Army proposed removing them about a year ago. Army officials say the animals represent a safety hazard, while advocates have argued they should be left alone. | Stars and Stripes >>

The Marines are conducting two research efforts to better tailor their recruiting campaigns, including one that will look at “the current mindset of the African American youth,” said Jim Edwards, a spokesman for Marine Corps Recruiting Command. “These topics were chosen in support of our enduring efforts to recruit future Marines from diverse backgrounds,” Edwards told Marine Corps Times. | Marine Times >>

Within the late 2020s or early 2030s, the Air Force envisions swarms of small autonomous drones that deploy on a plane anywhere in the world within 24 hours to project air power, said Col. Brandon Baker, chief of the Air Force Remotely Piloted Aircraft Capabilities Division in Washington, D.C. | Military.com >>

With multiple degrees, she might be overqualified, but being a transporter at the brain injury rehabilitation center seems to be the perfect fit for the veteran. “I got in the military at 17 years old. I served 23 years, was deployed a couple different times,” she said. | WHOTV >>

Chief Warrant Officer 2 Latifa Gaisi is a UH-60 pilot in the U.S. Army National Guard. She became interested in the AviatrixArt Calendar earlier this year when she was tagged by several friends in the open-model calls for female pilots on Facebook and Instagram. | Task and Purpose >>

A former Army specialist is hoping you have his back during a dark time in his life. The disabled veteran, who served two tours in Iraq, suffers from PTSD. Fortunately, he’s finding hope through a unique friendship. Chris Boulay found Blaze, a black German shepherd puppy, on the side of road nearly two months ago. The two have been inseparable since. | News on 6 >>