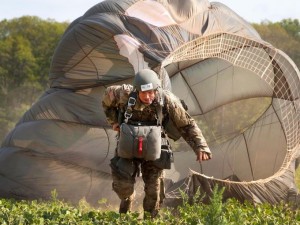 Combat veterans are flooding the workforce at rates unseen since World War II. Some estimates suggest that one million men and women of the U.S. military will return to civilian life in the next four years. Combined with tens of thousands who find themselves unexpected by-products of military downsizing, these veterans face the daunting mission of finding civilian employment after honorably serving their country abroad. | Huffington Post >>

The current national defense budget of over $600 billion a year far exceeds the Cold War average of about $525 billion (in inflation-adjusted 2016 dollars) and the $400 billion spent in 2001, according to official Pentagon and Office of Management and Budget data. The national defense budget, which doesn’t include Veterans Affairs or the Department of Homeland Security, constitutes 35% of global military spending and is more than that of the next eight countries—including China and Russia—combined. | The Wall Street Journal >>

In fact, there is an ongoing dispute between veterans groups and the Senate Armed Services Committee chairman over the access that veterans, in the wake of the Veterans Health Administration scandal, have to private doctors. McCain is in favor of more access, while veterans groups are against expanding it too far across the board, fearing such a move would undercut services at the VHA. | The Atlanta Journal Constitution >>

Afghan forces, backed by the United States, have killed an estimated 300 Islamic State fighters in an operation mounted two weeks ago, the top U.S. and NATO commander in Afghanistan said on Wednesday, calling it a severe blow to the group. | Reuters >>

At least 12 newborn babies were killed in a fire at a hospital in Baghdad, Iraqi authorities said Wednesday. The prematurely born infants died at the Yarmouk maternity hospital after the blaze broke out overnight, the health ministry said in a statement, according to Reuters. | USA Today >>

According to Kareem Atal, the head of Helmand’s provincial council, Taliban insurgents have completely surrounded Lashkar Gah after weeks of intense fighting across the province. Army and police units have now been pulled back from checkpoints farther afield and brought back to reinforce the city. Also, “new forces are arriving” in the city, he added. | The Associated Press >>

During a recent field exercise, a Marine headquarters group set up an expeditionary operations center and facilities, then hung camouflage netting over every building and structure — a time-honored Marine Corps practice that has fallen out of popularity during recent wars, in which the enemy did not possess aircraft. | Military.com >>

The Air Force has previously said it wants to increase its Aviator Retention Pay, which has been capped at $25,000 per year since 1999, to help stave off an exodus of its best fighter pilots for better-paying jobs at private airlines. In an Aug. 3 interview with Air Force Times, Air Force Secretary Deborah Lee James said the service has asked Congress for permission to offer almost twice that. | Air Force Times >>

Secretary of the Navy Ray Mabus said submarines have become more important to the national defense and the Navy has less excess capacity than the other armed services, but he also said all Navy facilities would be on the table, even sub bases, if there is a new base-closing round. | Connecticut Mirror >>

Andrew Brennan’s life shifted as he watched the motorcycles roaring around him. Brennan, a former Army captain who flew Blackhawk helicopters in Afghanistan, stood rapt as hundreds of veterans from Rolling Thunder passed through Albuquerque on their annual trek to the Vietnam Veterans Memorial in Washington D.C. Mixed in with the gray beards of the Vietnam soldiers were youthful faces, dozens of post-9/11 vets like him. The younger vets were welcomed with open arms, yet to Brennan it was never so apparent that they lacked their own ride — their own spot to grieve.| The Washington Post >>

Since arriving at Fox Sports in May 2015, IAVA board member Jamie Horowitz has upended the programming philosophy, rejecting the news and highlights genre epitomized by ESPN’s iconic SportsCenter in favor of host-driven opinion and debate programming. | The Hollywood Reporter >>

At 28, Pomeleo was older than most of his comrades and had experience in the tech field. He was put on computer duty, tracking troop movements on radio and live video feeds. When troops came under fire, or isolated a group of enemies, Pomeleo called in air assaults. When one of their vehicles drove over a bomb, Pomeleo called for a medevac to rescue survivors. Or to collect the dead. | City Pages >>