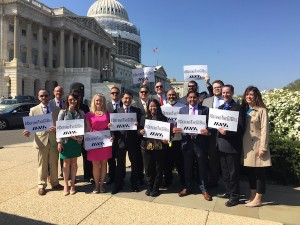 IAVA #DefendTheGIBill campaign leads to nearly 14,000 letters sent to Congress…and counting
Since the U.S. House of Representatives quietly passed a controversial veterans omnibus bill on February 9, the Post-9/11 veteran community has taken a stand to prevent cuts to the landmark veterans education benefit, the Post-9/11 GI Bill. Veterans and supporters are encouraged to join IAVA to #DefendTheGIBill as the U.S. Senate prepares to introduce a similar bill. | IAVA>>

U.S. Plans to Step Up Military Campaign Against ISIS
The Obama administration is preparing to broaden its military campaign against the Islamic State in Iraq and Syria by increasing the number of Special Operations forces who advise Syrian rebels, and it is also considering the addition of Army attack helicopters to the fight against militants in Iraq. | New York Times >>

Twelve people, including three children, were killed when Afghan and U.S. forces conducted a raid on the house of a suspected al Qaeda member in east Afghanistan, according to a confidential report and people familiar with the matter. | Wall Street Journal >>

Leadership turmoil within the Taliban since the death of the militant group’s founder has fueled closer links with foreign groups like al Qaeda, the new commander of international forces in Afghanistan said, complicating counter-terrorism efforts. | Reuters >>

More than 50 Taliban militants were killed Friday after the Taliban launched a major offensive in the northern province of Kunduz, an Afghan official said. Abdul Wasay Basil, spokesman for the provincial governor, said that more than 60 Taliban fighters were wounded, and that clashes were still ongoing. | AP >>

U.S. Defense Secretary Ash Carter said on Saturday he would ask Gulf states next week to contribute to efforts to rebuild parts of Iraq devastated by the fight against ISIS. | NBC News >>

Iraq’s parliament canceled a session on anti-graft reforms on Saturday, state TV said, as some MPs disputed the legitimacy of the speaker to chair the meeting in an escalation of a political crisis crippling state institutions. Reuters >>

The deployment of Marine EA-6B Prowler jammer planes to Turkey came amid growing concerns about the potential anti-aircraft threat from ISIS and other militant groups in Syria. | Military.com >>

The U.S. Army on Friday announced it has approved the first 22 women to be commissioned as infantry and armor officers after new rules issued last month opened all combat roles to female service members. | Washington Times >>

The Combat Hunter Trainer Course teaches Marines to use what they already possess, no batteries required. Tracking down a quarry, or simply reading the ground to determine if people have traveled through an area, can only be done with the eyeball. Determining a person’s intent and acting before an event occurs is life-saving and uses what we already have — our eyes. | Marine Corps. Times >>

The Pentagon is renewing its controversial push to close some military bases, and a new study suggests the Army could be impacted the most significantly. The Defense Department on Friday sent a report to Congress that concludes the military’s current network of installations has about 22 percent more space than is needed. | Military Times >>

U.S. Army retiree Mak Son owns Fur-Baby Pet Services on Milgen Road in Columbus. Son, a native of Cambodia who immigrated to the U.S. with his family when he was four months old, was wounded by a roadside bomb in 2011 while on patrol in Iraq. | Columbus Ledger-Enquirer >>

Brandon Rumbaugh has seen a fair share of tough times. The 27-year-old Uniontown man, who served in the Marines in Iraq and Afghanistan, stepped on an improvised explosive device in 2010 and lost both legs, one from the hip down and one from the knee. “I’ve seen the worst in life. I’ve been to war,” he told Waynesburg Central High School students Friday during a motivational speech designed to prevent bullying by pushing them to never give up in tough times. | Observer-Reporter>>

A Florida man is on voyage to set a Guinness World Record as he does a non-stop paddle board trip that will go 3,500 miles and 13 states. Josh Collins of Merritt Island, is paddle boarding the Tampa Bay area Friday and Saturday before continuing his journey to New York.  Collins, a Special Operations Combat Veteran, served tours to Iraq and Afghanistan. The wounded warrior has seven documented traumatic brain injuries. | ABC Action News >>

More than two years ago, lawmakers, impatient with the Defense and Veterans Affairs departments’ faltering efforts to combine their electronic health records, ordered them to at least translate their existing systems into a data format that both departments could understand. The Defense Department certified that it had done so last October, and VA has now done the same. | Federal News Radio >>

Department of Veterans Affairs investigators conducted spot checks at 10 veterans benefits offices around the country and came to a disturbing conclusion: The VA has been systemically shredding documents related to veterans’ claims — some potentially affecting their benefits. | Stars and Stripes >>

Senate lawmakers on Thursday once again signaled to the Veterans Affairs Department they want VA doctors able to talk to patients about use of medical marijuana. By a 20-10 bipartisan vote, the Senate Appropriations Committee passed an amendment to the military construction and veterans legislation allowing agency doctors to make recommendations to vets on the use of medical marijuana — something they can’t do now even in states where cannabis prescriptions are legal. | Military.com >>