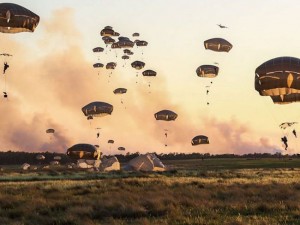 IAVA to Congress: Don’t cut the Post-9/11 GI Bill — ever
Leaders of Iraq and Afghanistan Veterans of America say they don’t believe Post-9/11 GI Bill benefits should be cut this year — or next year, or ever. So the advocates are working to pin down lawmakers to that lifetime promise as congressional leaders eye a slate of GI Bill rollbacks that could affect military families as soon as next year. | Military Times >>

Give Veterans Greater Access To Quality Care, Not Health Care Credit Cards
The head of Disabled American Veterans argues taking money from the VA for the private sector isn’t the cure for veterans care. When faced with something as complex as ensuring veterans have timely access to the health care they need, it’s always dangerous to gravitate toward simple-sounding solutions. That’s certainly the case this election year, as “let the money follow the veteran, instead of funding VA,” has become a popular soundbite on the campaign trail and even on Capitol Hill. | Task & Purpose >>

Veterans with service dogs say troubling encounters in public are frequent
“No pets except service dogs,” the signs on the doors read. But, increasingly, those with service dogs are being denied. The message on a service canine’s vest reads, “Working dog. Do not pet.” But, too many people are nonetheless reaching out to a dog in working attire. “The problem,” said certified master dog trainer and military veterans helpmate Mary Peter, “is the public is so uneducated. And rude. Their actions are causing stress.” | Tampa Bay Times >>

The United States has carried out 70 to 80 air strikes against Islamic State in Afghanistan in the three months since U.S. forces were given broader authority to target the militants, a U.S. military spokesman said on Thursday. | Reuters >>

Taliban insurgents ambushed and killed a police commander and seven other people, including three women, in Afghanistan on Thursday, two days after the insurgents announced the beginning of their spring offensive. | Reuters >>

President Obama claimed significant progress Wednesday in the military campaign against the Islamic State group in Syria and Iraq, but a top Syrian official said President Bashar Assad will not give up control of the war-torn nation, where the extremists have flourished. | Washington Times >>

The U.S.-led coalition staged 21 strikes on Wednesday against the Islamic State militant group, according to the coalition leading the operations in Iraq and Syria. In a statement released on Thursday, the Combined Joint Task Force said it conducted 17 strikes near seven Iraqi cities, including Hit, Mosul and Sinjar. Altogether, the strikes hit nine tactical units as well as a headquarters and a financial headquarters used by the militants, among other targets. | Reuters >>

Denied their own state in reality, Iraq’s Kurds have declared independence in cyberspace with a new domain name that has provoked the ire of a neighbor hostile to their aspirations. The new top-level domain “.krd” gives Kurds a separate space in the virtual world at a time when they are gaining legitimacy on the ground through their alliance with the U.S.-led coalition against Islamic State. | Reuters >>

Russian pilots rattled nerves aboard the destroyer Donald Cook, buzzing within yards of the ship in the Baltic Sea. Provocative, sure. But they weren’t a credible threat. So concludes a retired Navy commanding officer, who reviewed photos and videos from the run-ins on Monday andTuesday, when unarmed Sukhoi Su-24 fighters flew within 1,000 feet of the ship — once coming as close as 30 feet in what U.S. officials called “simulated attacks.” | Military Times >>

The F-35 Joint Strike Fighter is slated to make its international debut at the Leeuwarden Air Show in the Netherlands in June, Defense News reported Wednesday, one of several European appearances planned for the world’s most expensive jet this summer. | Stars and Stripes >>

Updates to the Marine Corps’ tattoo policy, addressing the size, placement and potential career ramifications of excessive ink, are expected to be released within weeks, Marine Corps Times has learned. | Marine Corps. Times >>

If you love obstacle courses and reality competition shows, but could do without all the backbiting drama that tends to come with them, Fox is premiering a new series this week you might want set your DVR for. Dubbed “American Grit,” the show pits 16 civilian competitors and four combat veteran coaches — two former Army soldiers, a Navy SEAL, and a Marine — across a series of military-grade and survival-themed challenges. | Military Times >>

It takes a special puppy to be a service dog. Only one puppy from each litter is qualified to be a service dog for a veteran, and sometimes, none of them have the temperament, according to Suzanne Ager, a puppy raiser. | USA Today >>

The Veteran Students Organization (VSO) set up a marine corps-inspired obstacle course on the Foote Green to raise funds for the more than 160 homeless veterans in Miami-Dade County, one of the areas with the highest rates of homeless veterans in the country. | The Miami Hurricane >>

An amendment added to the Veterans Affairs appropriations bill Thursday would allocate $88 million to VA to cover fertility treatments and counseling for veterans who can’t have children as a result of wartime injuries. | Military Times >>

When someone volunteers to serve in the U.S. military, the idea that they’d somehow will be punished by the country they are willing to die for seems virtually unthinkable. But it’s not a matter of heroism for non-U.S. citizens, who risk getting booted out of the country if they are convicted of a felony, once they have served their prison term. Chances are pretty good that their only way back home to America is after they’ve died. | Fox News >>