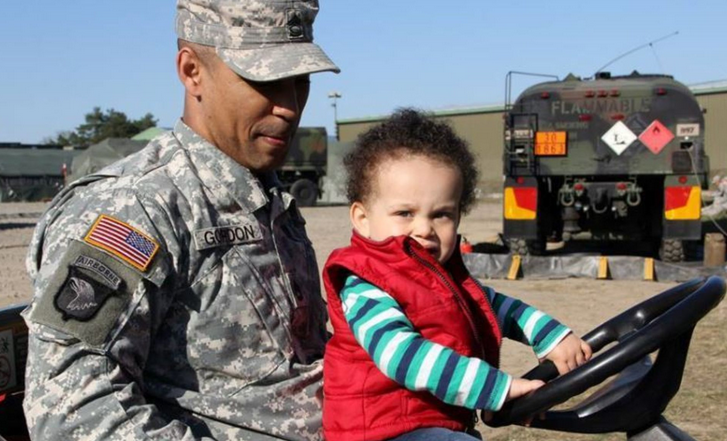 Sgt. 1st Class Sean Gordon of 212th Combat Support Hospital’s ground maintenance crew shows his son one of the machines he gets to work with on Family Day at the live surgical exercise at Miesau Ammo Depot. | Military Times >>

How PTSD Became a Problem Far Beyond the Battlefield
Though only 10 percent of American forces see combat, the U.S. military now has the highest rate of post-traumatic stress disorder in its history. Sebastian Junger investigates. | Vanity Fair >>

Veterans Groups File Suit Over New VA Policy on Benefits
Two veterans groups said Thursday that they filed suit against the Department of Veterans Affairs over a new policy requiring veterans to fill out a formal application or speak to a designated VA employee to begin the process of receiving benefits, rather than giving a simple notice. | Wall Street Journal >>

VA officials were warned about Aurora project before work began
U.S. Department of Veterans Affairs officials in Washington knew about management problems with the VA’s hospital project in Aurora as early as May 2011 — seven months before construction began — yet two years passed before any changes were made, documents show.  | The Denver Post >>

The Afghan government has launched a major offensive against Taliban forces near the north-eastern provincial capital of Kunduz. The Taliban have come close to the city in recent fighting, leaving it cut off and displacing tens of thousands. | BBC News >>

U.S. troops shot and wounded a civilian driver Wednesday night outside Bagram Airfield, the largest U.S. military base in Afghanistan, after the driver ignored the forces’ signals to stop his vehicle. | CBS News >>

Commercial flights to Afghanistan’s besieged northern city of Kunduz have been suspended, an official said on Thursday, as hundreds of Taliban militants fought against government forces struggling to oust them from the city’s outskirts. | Reuters >>

The fight against ISIS is raging in Iraq as Iraqi and Kurdish forces try to push back the terrorist group, though there are new concerns among U.S. officials over their strategy. Pentagon officials said Wednesday they aren’t confident Iraq could secure one of the country’s largest oil refineries in Baiji in an ongoing battle with militants. | Fox News >>

Sen. Tim Kaine (D-Va.) will head to the Senate floor Thursday to point out that it’s been nine months since the U.S. began bombing Iraq and Syria — and nine months of Congress doing nothing to authorize it. | Huffington Post >>

The Obama administration has launched a campaign on Capitol Hill aimed at scrapping a legislative measure that has outraged the Iraqi government and led a senior Shiite cleric to threaten the mobilization of a powerful militia that could threaten U.S. troops. | Washington Post >>

Reagan National Airport will be closed to commercial traffic for an hour Friday as the skies over Washington fill with the roar of an antique air armada buzzing the capital in honor of World War II veterans. | Washington Post >>

Gen. Joseph Dunford’s nomination to succeed Army Gen. Martin Dempsey as chairman of the Joint Chiefs of Staff leaves the Marine Corps in need of a new top officer for the second time in less than a year. But it also represents history in the making for the Corps: If confirmed by the Senate, Dunford will become only the second Marine general in history to hold the prestigious position. | Marine Corps Times >>

The U.S. Navy will no longer accompany commercial ships through the Strait of Hormuz as tensions — sparked by an Iranian patrol boat seizing a Marshall Islands-flagged cargo ship last month — die down. | Military.com >>

Paralympic silver medalist and Army veteran Heath Calhoun lost his legs in Iraq when a rocket-propelled grenade hit his Humvee. During his rehabilitation, sports activities soon became a part of his healing. “In the beginning, I was given some opportunities when I was in the hospital at Walter Reed to get out and participate in some sports rehabilitation. At first, it was just fun. Just something to do,” Calhoun said. | USA Today >>

Barrington High School graduate Daniel Alarik knows from personal experience the culture shock that veterans often face upon re-entering civilian life. To accommodate his family and his fellow veterans, Alarik, a former Army drill sergeant and a 2000 BHS graduate, came up with a unique idea in 2009 that eventually became Grunt Style, a military-themed clothing and apparel company of which 75 percent of employees are veterans. | Chicago Tribune >>

Army veteran Andrew Smith lost both of his legs in an IED explosion in Afghanistan in March of 2012. Four months later Jason Smith was also injured in a roadside bomb explosion in Afghanistan. He lost both of his legs too. They were injured same war. They aren’t related, but they have the same last name. They live just a few miles apart, but before their injuries they had never heard of each other. | News Channel 9 ABC >>

Today at City Hall, the City Council Committee on Veterans, led by Council Member Eric Ulrich, was a hearing on oversight of the Mayor’s Office of Veterans Affairs (MOVA). Commissioner Loree Sutton promised specifics, but did not deliver–unless we consider the litany of organizations and agencies she listed at length as having met with since September to be her promised specifics. | NYC Veterans Alliance >>

To understand the true meaning of “experience,” take a moment to compare former Sen. Jim Webb’s (D-Va.) resume to the decades Hillary Clinton has amassed in public life or the manner a surname has benefited former Gov. Jeb Bush (R-Fla.). In a world where our commander in chief might be pressured to send Americans back to Iraq (40 percent of voters recently supported boots on the ground against the Islamic State in Iraq and Syria, or ISIS) or wage perpetual counterinsurgency wars in places most Americans can’t even find on a map, Webb learned firsthand the lessons of Vietnam. | The Hill >>

North Carolina veteran very much alive is fighting for his life following a clerical error that sent condolences to his family and a document from the Department of Veteran Affairs and the Department of Defense stating he had died. | Fox News >>