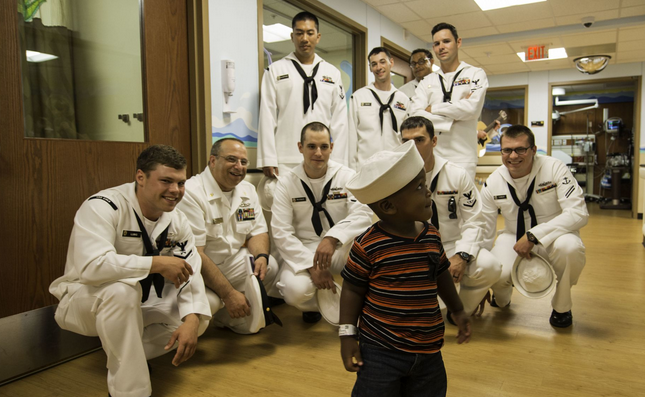 VA gets praise for Choice changes, but veterans groups say more must be done
Advocates applauded the progress the Department of Veterans Affairs has made in a much-maligned program to offer private health care to eligible veterans, but said too many are being excluded or are simply unaware of the option. | Stars and Stripes >>

Gillibrand to push aid for Navy vets exposed to Agent Orange
Sen. Kirsten Gillibrand will use a Veteran’s Affairs Committee hearing Wednesday to push a bill to extend Veterans Affairs Department benefits to “blue water” Vietnam-era veterans exposed to Agent Orange. It’s a bid to right what many of those Navy veterans see as their unfair exclusion from a 1991 law that requires the VA to provide presumptive disability coverage to Vietnam veterans potentially exposed to Agent Orange, a toxic herbicide the U.S. used to remove jungle foliage if they develop health conditions tied to the chemical. | NY Daily News >>

Military Stalls on Efforts to Repair Drone Troubles Depicted in ‘Good Kill’
New data the Air Force plans to release later this month show the results of its efforts to improve the mental health of drone pilots have stalled since 2012, the last time the service surveyed its drone teams. Those numbers had improved in 2012 from 2010, when the first survey of its kind showed high rates of drone pilots feeling overworked and expressing some concerns about the nature of the operations they conducted. | U.S. News & World Report >>

NATO will keep some troops in Afghanistan even after its current training mission ends around the end of next year, the alliance said on Wednesday, in a signal of support for Afghan security forces struggling to repel a Taliban offensive. | Reuters >>

NATO will maintain a military presence in Afghanistan once its current Resolute Support mission concludes, but under civilian leadership, NATO announced on Wednesday. | Stars and Stripes >>

The Iraqi government on Wednesday said that the second in command of the Islamic State had been killed in an airstrike carried out by the American-led coalition in northern Iraq, a claim American officials said they could not confirm. | New York Times >>

The movement of migrants across the Middle East and Africa towards Europe has generated up to $323 million for the Islamic State in Iraq and Greater Syria (ISIS) and other jihadist groups, a new report has revealed. | Time >>

U.S. and coalition military forces have continued to attack Islamic State of Iraq and the Levant terrorists in Syria and Iraq, Combined Joint Task Force Operation Inherent Resolve officials reported today. Officials reported details of the latest strikes, which took place between 8 a.m. yesterday and 8 a.m. today, local time, noting that assessments of results are based on initial reports. | Defense.gov >>

Hours of searching mountainous terrain on foot and from the air have so far failed to locate a U.S. military helicopter that went missing in Nepal as it helped with relief efforts in the earthquake-ravaged nation. | CNN >>

Fair fitness standards, less online training, more educational opportunities and a better balance of work and family life. Those hot button issues for sailors and Marines are now at the forefront of a new campaign by the Navy’s top civilian to boost quality of life and recruit more women into the ranks. | Navy Times >>

Two Florida funeral home employees have been fired after they left a hearse carrying a decorated Army veteran’s body in a Dunkin’ Donuts parking lot during a coffee run. | NY Daily News >>

A Marine veteran and a friend will walk from Hartsville to Columbus on Saturday, carrying the American and Marine flags to remind residents about the struggles veterans face after returning from deployment. | The Republic >>

As of Tuesday, [Nick] Colgin — now program manager for No Barriers USA — and three other veterans were at Camp 2 on Mount McKinley, nearly 10,000 feet into their mission to conquer North America’s tallest peak. Their 559 pounds of gear include the usual mountaineering equipment, cold-weather survival gear — and American flags that bear the names of fallen veterans. There’s also a Sharpie so they can add more names, relayed to them by satellite phone as they climb the mountain. | Alaska Dispatch News >>

When Troy City Councilman Brock Heath wanted to help fellow veterans, he wrote a book on how to succeed in the civilian world. When he wanted to increase the assistance he was offering with personal development, he expanded a side business into a career. | Dayton Daily News >>

Defense Secretary Ashton B. Carter is recommending Gen. Mark Milley, the head of Army Forces Command at Fort Bragg, N.C., to be the next army chief of staff, and Adm. John Richardson, head of the Navy’s nuclear program, to be the next chief of naval operations, a senior administration official said on Wednesday. | New York Times >>

Councilman Eric Ulrich plans to introduce a bill later this week calling for the creation of a task force to study veterans’ access to legal services and resources within the city’s criminal justice system. | Capital New York >>

The former director of the Department of Veterans Affairs facility in Phoenix is taking court action against her firing, which resulted from the scandal over the cover-up of long patient wait times. Sharon Helman’s attorney, Debra L. Roth, filed a legal motion filed this week with the U.S. Court of Appeals for the Federal Circuit arguing that the Veterans Access, Choice and Accountability Act of 2014 severely limited Helman’s due process rights. | Washington Post >>