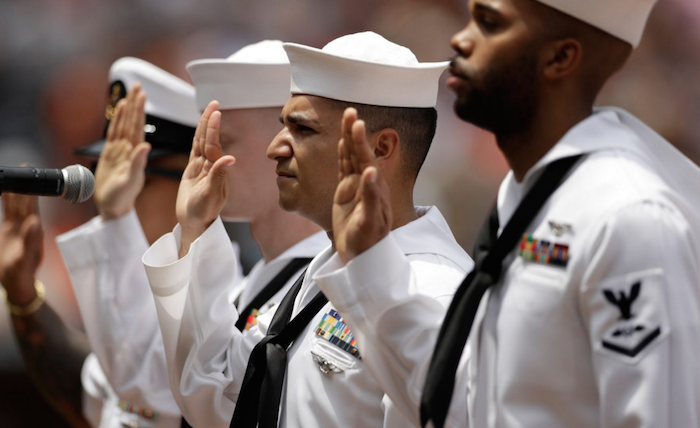 “Veterans’ health care benefits have already been ‘paid for’ through the service and sacrifice of the men and women who wore our nation’s uniform, millions of whom suffered injuries, illnesses and lifelong disabilities,” the groups said. “If new funding is directed only or primarily to private-sector ‘Choice’ care without any adequate investment to modernize VA, the viability of the entire system will soon be in danger.” | The Associated Press >>

Aldrin, a U.S. Air Force veteran of the Korean War, was chosen as the grand marshal for the 2017 parade by the United War Veterans Council on Wednesday. The announcement came during the same week that the nation celebrated the 48th anniversary of the Apollo 11 lunar landing on July 20, 1969. | Task and Purpose >>

Starting later this year, all honorably discharged veterans, no matter their branch of service, will be eligible to shop tax-free online at the Army & Air Force Exchange Service with the same discounts they enjoyed on base while in the military. It’s the latest way in which the organization is trying to keep its customers as the armed forces shrink and airmen and soldiers buy more for delivery. | Military Times >>

A German girl who ran away from home after converting to Islam has been found as Iraqi forces liberated the northern city of Mosul from Islamic State extremists, German and Iraqi officials said Saturday. She is reported to be in good health and will be interrogated next week by Iraqi officials. | ABC News >>

This is the painful reality of Afghanistan 2017. The country is in one of the most violent periods of its recent history, and its challenges are deepening. But the sense of exhaustion, of solutions long having lost their sparkle, pervades. And as President Trump weighs his first move in America’s longest war, its 15 years make it absolutely nothing new to many of the Marines currently at its sharp end. | CNN >>

“Extending cooperation and exchanging experiences in fighting terrorism and extremism, border security, and educational, logistical, technical and military support are among the provisions of this memorandum,” IRNA reported after the signing of the accord in Tehran. | Reuters >>

Donald Matthews, 26, was pronounced dead of multiple gunshot wounds in the emergency room at Midtown Medical Center, Muscogee County Coroner Buddy Bryan said. His body will be transported to the crime lab in Decatur for an autopsy. | Stars and Stripes >>

Previous caches contained few videos, unlike the Mike Uniform cache, which indicates there are new victims. The shared drive contains 3,863 photos and videos, ranging from professional pornography to homemade videos and selfies. Some are screenshots of temporary Snapchat stories, and others are photos of a woman in a U.S. Marine Corps uniform engaging in oral sex and posing afterward. | The Daily Beast >>

“American steel and American hands have constructed a 100,000-ton message to the world: American might is second to none, and we’re getting bigger and better and stronger every day of my administration,” Trump said. “Wherever this vessel cuts through the horizon, our allies will rest easy and our enemies will shake with fear, because everyone will know that America is coming and America is coming strong.” | Military.com >>

A few months into his second deployment in Afghanistan in 2015 – which interrupted his studies at the University of Virginia’s Darden School of Business – U.S. Army Staff Sgt. Michael Sargent found himself trapped by Taliban insurgents in a dark, muddy compound in the country’s tumultuous Helmand province. | UVA Today >>

In a letter to the council, Welker’s physician Dr. Thomas Hanf (certainly no quack) said that “Welker had made great strides over the past five years on his physical pains, but the post-traumatic stress disorder from serving in Iraq in 2005 had been harder to deal with, and that the progress Welker had made with the ducks encouraged him,” writes the Tribune. Welker also provided seven signed letters from his neighbors stating they had no issue with the animals. | Task and Purpose >>

Veterans make up nearly 80 percent of Boston’s firefighting force, and fill countless other public service roles from policeman to elected official. Following federal and state mandates, Boston incorporates a “veterans preference” system in its public hiring – but that falls short of explaining the impetus of veterans there and across the nation continuing to be public servants in their communities. | The Hill >>