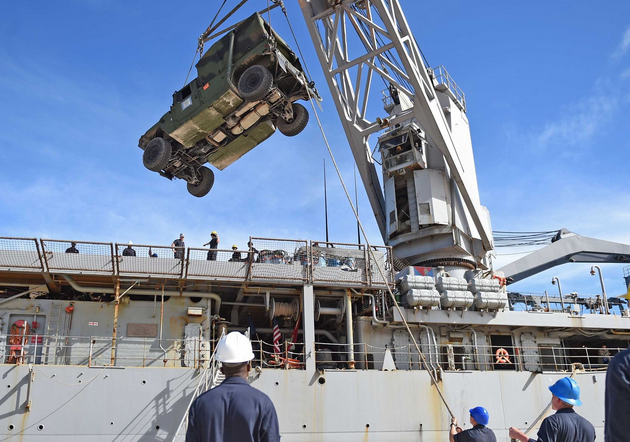 VA Secretary Calls for More Research into Traumatic Brain Injury
Representatives from the public and private sectors and nonprofits convened for a two-day summit in Washington, D.C., to come up with new ideas for treating people with traumatic brain injuries. The event, which began Monday, was organized by the Veterans Affairs Department, which is hoping to harness the collective expertise from various agencies and foundations to build on advances that VA already has made. | Military.com >>

VA’s Backlog of Disability Claims Falls to 8-Year Low
The Department of Veterans Affairs said Monday its backlog of disability claims has shrunk to its lowest level since record-keeping began in 2007. The backlog of just over 98,000 is an 84% drop from its peak in March 2013, said Allison Hickey, the VA’s undersecretary for benefits. The fall was due in part to more employees processing claims and using digital records rather than paper copies. | The Wall Street Journal >>

Study: Troops discharged for misconduct at greater risk of homelessness
Troops separated from military service because of misconduct are far more likely to become homeless than other veterans, a study released Tuesday has found. Researchers with the Veterans Affairs Salt Lake City Health Care System in Utah found that more than a quarter of veterans who were homeless at their first Veterans Affairs visit had been separated for misconduct, with a risk for homelessness nearly five times greater than that for troops with normal separations. | Stars and Stripes >>

The biting political satire of a Facebook page called Kabul Taxi has got under the skin of Afghanistan’s spy agency – enough so that it summoned the two journalists it suspects of being behind it for a two-hour grilling. | Reuters >>

NATO forces are back helping Afghan troops repel Taliban insurgents from the strategic opium-growing town of Musa Qala in Helmand province, where in 2007 British and U.S. soldiers waged one of the emblematic battles of the war. | Reuters >>

U.S. company DynCorp International on Monday named three employees who were killed by a car bomb that hit their armored car in Kabul at the weekend, saying the men all worked on a program to train the Afghan army and police. | Reuters >>

The burgeoning list of appalling acts by ISIS has grown even longer: The Islamic extremist group has blown up a nearly 2,000-year-old temple in the historic ruins of Palmyra, Syria. UNESCO, the United Nations cultural organization, called the destruction of the Temple of Baalshamin a “war crime.” | CNN >>

Prime Minister Haider al-Abadi said the battle over the northern town of Baiji and its refinery – Iraq’s largest – was critical to the fight against Islamic State. The town, about 190 km (120 miles) north of Baghdad, has been a battlefront for more than a year since its seizure by the Islamists in June 2014 as they swept through much of northern Iraq toward the capital. | Reuters >>

U.N. rights officials are denouncing the execution of a man and his two wives in Iraq’s Kurdish region over the kidnapping and murder of two girls, saying they fear the self-ruled region may slide back toward use of the death penalty. | Associated Press >>

Secretary of the Air Force Deborah Lee James and Chief of Staff of the Air Force Gen. Mark A. Welsh III held a State of the Air Force address at the Pentagon, Aug. 24. The first topic of discussion was about Airman 1st Class Spencer Stone’s heroic actions aboard a train in France. James briefed that Stone’s unit will be nominating him for the Airman’s Medal. | Air Force Link >>

Say “military cook” to most Americans, and they will conjure a picture of Cookie in the Beetle Bailey comic strip. They certainly wouldn’t conjure a picture of Navy Senior Chief Petty Officer Derrick D. Davenport, an executive chef with the Joint Staff and the 2015 American Culinary Federation’s Chef of the Year. | Military.com >>

NATO will hold its largest amphibious exercise in more than a decade this fall with more than 30 nations and 36,000 allied troops participating, including robust support from U.S. soldiers, sailors, airmen and Marines. | Marine Corps Times >>

For Matthew Smith, owning his own record label wasn’t always part of his game plan. A lot of things had to happen before he got there. There were his stints in Iraq and Afghanistan, where he survived almost a decade of combat. Upon his return, he stared death in the face yet again when he got into a motorcycle accident. When Smith’s journey eventually led him to music, it wasn’t the metal he’d listened to in his youth but hip-hop — and the world of juggalos. | Dallas Observer >>

Three young men who disarmed a gunman on a high-speed train bound for Paris will get a heroes’ welcome in their hometown in California, the mayor of Sacramento said on Monday. “Big news!” Sacramento Mayor Kevin Johnson tweeted. “We are throwing a parade for our 3 hometown heroes!” He used the hashtag “#SacramentoProud.” | Reuters >>

A 2014 law to reform the Veterans Affairs health care system has only made things worse in Alaska, according to veterans testifying Monday at a congressional listening session in Fairbanks. A group of about two dozen veterans at the Fairbanks North Star Borough Assembly chambers told Dr. David Shulkin, the third-in-command at the VA, that the Veterans Choice Act hasn’t delivered the improved care that it promised, reported The Fairbanks Daily News-Miner. | Associated Press >>

GOP presidential candidate Jeb Bush on Tuesday argued that military sequestration must be reversed, but he stopped short of calling to end the budget cuts for the Department of Veterans Affairs. At a town hall in Englewood, Colo., a Vietnam veteran told Bush that the VA has tried to fix its issues by asking Congress to fund construction and an increase in hiring. Sequestration, or spending ceilings, however, has slashed funding for those projects, he said. | The Hill >>

Thanks to a new bill veterans won’t have to worry about paying out-of-state tuition at any public university. Provisions in the Veterans’ Access to Care through Choice, Accountability, and Transparency Act of 2014 will require all public universities to offer in-state tuition to veterans making use of their GI Bill. | The Shreveport Times >>