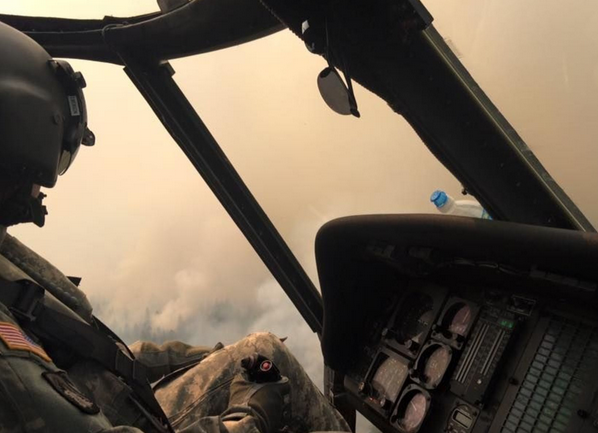 A Washington National Guard Black Hawk pilot looks out over the Cougar Creek fire near Mt. Adams on Monday while helping battle the blaze. | Military Times >>

Daniel Wolfe Is Killing Himself Live on Facebook
He’s wearing plaid shorts, black-and-green tennis shoes, a dark-color shirt. His backpack contains most of what he’s got left. Discharge papers. Records from V.A. hospitals in two states. Old warrants for his arrest. He’s got a V.A.-issued pamphlet on “Pain and Pain Management” and an appointment card for “Mandatory Suicide Prevention Education,” dated three months ago. He’s got a bottle of Jack Daniel’s, a cell phone, and a box cutter. | GQ >>

Backlog of veterans claims dips below 100,000 cases
The number of backlogged veterans disability claims fell under 100,000 cases this weekend, a figure that officials with the Department of Veterans Affairs are hailing as proof that years of effort into modernizing their systems are paying dividends. | Military Times >>

Even as United States spending and military involvement dwindle in Afghanistan, some members of Congress and outside groups say it is as important as ever to have an independent watchdog like the special inspector general. Congress created the unusual cross-agency office in 2008 to determine what exactly the government has bought with the more than $100 billion it has spent on reconstruction, and although Congress has reduced annual appropriations for reconstruction in Afghanistan, there is still a little over $15 billion left to be spent. | New York Times >>

Airmen assigned to the 62nd Expeditionary Reconnaissance Squadron provide world-class close air support and intelligence, surveillance and reconnaissance in the Afghanistan area of operations. They complete this mission by maintaining, launching and recovering all MQ-1B Predators and MQ-9 Reapers in the country from Kandahar and Jalalabad Airfields. | U.S. Air Force >>

On a NATO base in Jalalabad — one of the bloodiest areas of Afghanistan — U.S. Army Brig. Gen. Mitchell Chitwood delivered a stern message this month to Afghan military leaders: Even as you hunt down the Taliban, you have to respect people’s basic rights. | Baltimore Sun >>

When Ryan O’Leary went to war for the third time, he was expecting to fight the Islamic State of Iraq and Greater Syria (ISIS), the militant group that has captured vast swathes of Iraq and Syria. After serving with the Iowa National Guard in Iraq in 2007-8 and then in Afghanistan in 2010-11, he went back to Iraq earlier this year of his own volition. | TIME >>

Opposition rebels and local residents on Sunday accused Islamic State militants of using a chemical agent in a new attack in Syria. The attack late Friday near the city of Aleppo killed one person and wounded at least 10, residents said. It came after the U.S. said it believed Islamic State had used mustard agent against Kurdish forces in Iraq and Syria earlier this summer—the first indication the militants had obtained a banned chemical weapon. | Wall Street Journal >>

United Nations relief agencies today announced the launch of a national hotline in Iraq to respond to the urgent food, medical and shelter needs of people displaced by the fighting now numbering 3.2 million and scattered in over 3,000 hard-to-reach locations across the war-ravaged country. | UN News Centre >>

The Army’s new chief of staff, Gen. Mark Milley, is taking a calculated approach to arguably the most consequential decision of his early tenure — whether to recommend that any all-male combat roles remain closed to women. | Associated Press >>

Since the beginning of June, one of the U.S. Navy’s premier diving teams has been working with the Corps of Engineers and archaeologists to help salvage Confederate warship CSS Georgia from the depths of the Savannah River. | Savannah Morning News >>

The new talent management program for Marine grunts will return next year with bigger bonuses and wider eligibility — and similar programs are now in the works for enlisted leaders in non-infantry fields. On the heels of the Squad Leader Development Program’s successful first year, planners are moving forward with variants on the program for every military occupational specialty. | Marine Corps Times >>

The trip is an outgrowth of the Warrior Hike, started by Iraq War veteran Sean Gobin in 2012 to help fellow soldiers recover from post-traumatic stress disorder (PTSD). The Warrior Hike challenges veterans to cover 2,000 miles of the Appalachian Trail. Gobin said the aim is to help soldiers literally ‘walk off the war’ but he realized many veterans are not physically able to walk so far over rough ground. | Winona Daily News >>

Two combat vets are taking their military skills to the private sector by providing mission-focused, team-building events to New York companies. Formerly a reconnaissance pilot for the U.S. Army, Shaw often faced moments when his mission parameters changed drastically, challenging him to adapt and execute his objective differently than first expected. Using his experience from two deployments to Afghanistan in 2009 and 2011, Shaw adapted the military decision-making process into a corporate, team-building activity for companies around New York, Connecticut, and greater East Coast region. | Task & Purpose >>

The Gym and Tan Line Studio, along with Active Heroes, hosted Workout of the Day Saturday to raise awareness of veteran suicides. Twenty-two veterans a day commit suicide, according to the U.S. Department of Veterans Affairs, and so the Workout of the Day was 22 exercises with 22 reps each. At minute 22, all of the athletes and trainers would take two- minute moment of silence for veterans who have taken their own lives. | Montgomery News >>