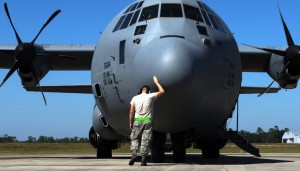 Air Force crew chief from the 6th Airlift Squadron places his hand on the nose of a C-130 Hercules that is headed to provide humanitarian aid to Port-au-Prince, Haiti, in response to Hurricane Matthew Oct. 9, 2016, at Joint base Maguire-Dix-Lakehurst, NJ. Staff Sgt. Paul Labbe/Air Force | Military Times>>

U.S. Sen. Dick Durbin used a stop Monday in Jacksonville to show support for veterans as well as promote the idea of a veterans’ court. | Jacksonville Journal Courier >>

Post-traumatic stress disorder is a serious public health challenge. It is estimated that about eight million people in the U.S. (2.5 percent of the total population) suffer from it. This rate jumps to about 11 to 20 percent among Iraq and Afghanistan veterans who suffer from diagnosed or undiagnosed PTSD. | The Chickasha News >>

Squinting so he could drive through the vodka and the pills, Heath Phillips searched for a tree he could wrap his truck around. It was a frigid February day in 2009, some 200 miles north-west of New York City, on a road Phillips drove every day to get to work. He describes this moment as his rock bottom, but it was not his first suicide attempt. Twenty-one years earlier, Phillips had first tried to kill himself aboard the ammunition ship USS Butte after his shipmates repeatedly raped him. | The Guardian >>

The spokesman for the U.S.-led coalition helping the Iraqi military on Monday defended recent pronouncements that the operation to retake Mosul is imminent, saying the advanced warning gives civilians hope they will soon be liberated and encourages defections of extremist fighters. | Military.com >>

On June 10, 2014, the day the black flag of the Islamic State militant group went up over the city of Mosul in northern Iraq, life for an ISIS fighter was good. The seizure of a city of nearly 2 million showed that ISIS leader Abu Bakr al-Baghdadi was making good on his claim to set up a “caliphate” across a vast swath of the Middle East. Foreign fighters flocked to a group once famously mocked by President Barack Obama as the “JV team.” And why not? After taking Mosul, ISIS fighters were paid $500 a month and given a cellphone and a car. Amid the deepening chaos in the Middle East, Daesh, as the group is called in Arabic, had emerged as the strong horse. | Newsweek >>

It has been a big year for women in the military, as 2016 marked the first time women could apply to serve in all military occupations and positions and saw more female leaders hit occupational milestones. | Military.com >>

U.S. military installations in the path of Hurricane Matthew were resuming some operations Monday as personnel began returning to base in some areas, but power outages and storm damage were hampering return to full operations. | Military.com >>

They’ve been doing this type of training for decades, but it’s unclear how much longer that will happen with new Philippines President Rodrigo Duterte throwing mud at U.S. officials in the form of crass insults and threats to end the bilateral training and get closer America’s rivals, Russia and China. | Stars & Stripes >>

Marshall “Doc” Leary, a chaplain with the Veterans of Foreign Wars Post 1634, used picture day Monday at Skyview High School to help the football team get the big picture on struggle of veterans returning home following combat. Leary, 45, a medically retired army medic and proud 1989 Skyview graduate, talked to uniformed players after they had posed for team pictures. Leary briefly discussed VFW efforts to help returning veterans with PTSD and other combat-related conditions — sometimes as simple as listening. | The Billings Gazette >>

People on the streets of Troy, New York, stared as a man dressed in full military gear walked around the city carrying a large skeleton on his back.
One of those people, Stacy Kieper, couldn’t help herself. She needed to know what this man was doing. So, she stopped and asked him. Holding back tears, the man told her that he was raising awareness. | CBS News >>

Ryan Garrison’s service dog wouldn’t stop bugging him. At a dinner outing with his wife, Julie, at Fleming’s Steakhouse in Baltimore, Garrison was growing nervous, clenching his hands. Being in public spaces had been a problem for the veteran since his return from Iraq, where he fractured two disks in his spine escaping a grenade blast in 2007. | Chicago Tribune >>