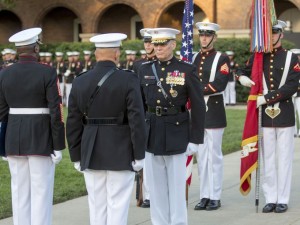 The voice of survivors should take precedence over the voice of military leaders in the debate over transferring prosecution of military sexual assault cases from military commanders to independent military trial lawyers, said U.S. Sen. Kirsten Gillibrand. “The weight of the evidence is, ‘This is a good reform that will make a difference,’” Gillibrand, D-N.Y., said Wednesday in a meeting with The Post-Star editorial board. | Watertown Daily Times >>

A taxpayer watchdog group is calling on the Department of Veterans Affairs to showcase work by artists who have served in the military, after it was revealed the VA spent some $20 million on lavish art at facilities around the country.| Military.com >>

Ashford University withdrew its request to receive GI Bill certification in California, further endangering benefits for more than 6,000 veterans attending their mostly online program, according to a report filed Tuesday. Bridgepoint Education, the university’s parent company, withdrew its request for certification from the state of California on June 30, according to a Securities and Exchange Commission report. | Stars and Stripes >>

Iraq got the first scoring chance of the match in the 12th minute as Mohanad Abdul Raheem nearly scored off a flick-on header, but his attempt deflected off the post. Brazil didn’t have too much significant movement going forward until Neymar had a long range attempt sail just over the crossbar in the 20th minute. | NBC >>

Investigators in Afghanistan are searching for an American and an Australian who were kidnapped in western Kabul, the city’s police chief told CNN. The two men, lecturers at the American University of Afghanistan, were kidnapped Sunday evening when two gunmen stopped the car they were riding in, an Afghan security official told CNN. | CNN >>

Fort Campbell says about 400 soldiers with the 101st Airborne Division are deploying to Iraq this summer. The post on the Kentucky-Tennessee border says the soldiers from the 2nd Brigade Combat Team will deploy as part of an increase in authorized troop levels in Iraq. They are to join some 1,300 previously deployed soldiers from the same unit who deployed in the spring. | Fox News >>

A U.S. Navy guided missile destroyer arrived in the northern Chinese port of Qingdao on Monday in the first visit by an American warship to the country since Beijing responded angrily to an arbitration panel’s ruling that its expansive South China Sea maritime claims had no basis in law. | Navy Times >>

Tiny drones, no bigger than your palm, were the big stars of an Army experiment in Hawaii, participants told Breaking Defense. Larger ground robots, however, struggled in the jungle. Staff Sergeant James Roe told me he was “blown away” by the PD-100 Black Hornet, a commercially available mini-drone used in PACMAN-I (Pacific Manned-Unmanned Initiative, part of the Pacific Pathways exercises). | Breaking Defense >>

First, they’d pick out a plane, likely an existing one, called the OA-X, (Observation, Attack, Experimental), which would likely be an existing plane with a low operating cost. Propeller-driven planes like the Beechcraft AT-6, already in use as a training plane for the Air Force, or Embraer A-29 Super Tucano, which the US recently gave to Afghanistan for counter-insurgency missions, are possible options. | Business Insider >>

When Air Force Col. Gary West told his wife Colette that he wanted to cycle down the East Coast, she did a “belly laugh.” It had been years since he had even owned a bike. But West trained for three years to be able to bike more than 2,500 miles from Lubec, Maine, to Key West, Florida, to benefit the families of fallen veterans on a Patriot Honor Ride. | The Salem News >>

Since she was discharged from the Army in 2012, Justine McCarthy of Summerville rarely ventured more than a mile and a half from her house, other than to go to the VA hospital. The veteran, who endured tours in Iraq and Afghanistan, suffered from an injury in 2007 and from post-traumatic stress disorder. | The Post and Courier >>

By the time Michael Beattie pulled into his hotel in Red Wing Thursday evening, he was nearing the end of an exhausting day. The 67-year-old Navy veteran embarked on the 125th day of his 12,000-mile bicycle journey at 6:30 a.m. In the midst of what amounted to a 79-mile ride for the day, Thursday morning’s downpour ascended on the area and soaked Beattie’s clothes and gear as he approached Osseo. | The Red Wing Republican Eagle >>