Read: My Transition from the Military and my Search for New Meaning

I always knew the military was the correct path for me. I grew up a “military brat” and traveled all around the world with my family. I remember always trying on my dad’s uniform and pretending I was a Soldier. It was something I saw myself doing and excelling at. In October 2010, I signed my contract to join the Army. I often wondered if I made the right decision but after a couple of years in and a deployment to Afghanistan, I realized that the Army was part of my life for the long term. I loved the training, discipline and life I had in the Army. I also loved the camaraderie I had with my fellow Soldiers. I could not imagine my life outside the Army and had dreams of becoming an officer through Officer Candidate School (OCS). 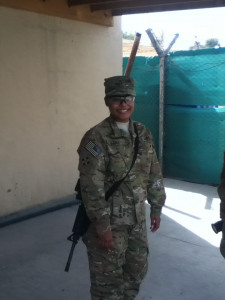 In 2015, while in Korea, I decided to submit my OCS packet and had the full support of my Commander. Unfortunately, I had been experiencing knee pain for a few months and after multiple trips to the doctor, x-rays and MRIs, I was diagnosed with arthritis. My dreams were crushed and I felt helpless. My doctor had to rule out any other knee issues and in March 2015, I had surgery on my knee. Everything changed after that. I was now unable to run and unable to attend OCS. As I was nearing my ETS date, I knew OCS was out of the question, therefore, I decided to get out of the Army on my ETS date.

Before getting out, I received an acceptance letter from the New York Institute of Technology to study human resources in New York City. I was thrilled and ready for a new adventure! Unfortunately, I deferred my acceptance for one year to allow myself some time to “adjust” to civilian life in Austin, TX. Three months after my ETS date, I accepted a job offer as an Administrative Assistant for my county in Austin. I felt so fortunate to have found employment so quickly as I know many struggle to find a job right after leaving the military. I thought that I was going to begin a new chapter in my life and kick adjustment in the butt. I was so wrong. I felt very unfulfilled and worthless. I felt alone, I felt useless and I felt like my life no longer had purpose. I joined a CrossFit gym because I had heard it would give me a sense of community. I also started going to my local vet center to receive mental health care.

I spent 9 miserable months at that job. I contacted the National Guard, the Reserves and even the Air Force about joining again. I knew I could not run, but I was willing to lie my way back in because nothing else worked for me. I contacted multiple recruiters but was frightened by the idea of going to MEPS again and getting caught lying about my physical health and my inability to be fit for duty. I was so miserable that I changed jobs after 9 months and left the next job after 3 months.

I finally decided to make the move to NYC in 2016 to start school in the Fall. I thought “this is it”, “this is going to be my new home”. I was way in over my head! I found a temporary job in human resources through a classmate and then received full employment as a Human Resources Associate for a catering company in NYC. I was still not happy. I thought there was something wrong with me. At this point, I could not find meaningful employment. I struggled with maintaining relationships and I was certainly not making new friends. I was also making excuses to move apartments and was paying hefty penalty fees for breaking my leases early. I was trying to find my place but instead I was angry everyday because I was not in the Army.

In March 2017, I met with my school advisor to let him know I was quitting school and moving back with my parents in North Carolina because I could not bare the pain and constant struggle I was feeling inside every single day. I was battling with myself and didn’t want to go through life anymore. I never thought of hurting myself, but I knew I would be okay if I was not around anymore. Everyday felt like I was walking around with a tight knot on my chest that even with the most effort I could not shake. I knew the pain was associated with MY failure of not becoming an officer in the Army. I reflected that when I am 90 years old, I will always think “what if”. What if I never got the surgery? What if I never got out of the Army? And the most hurtful one is “what if I actually went to OCS?”

Luckily, I learned about Iraq and Afghanistan Veterans of America (IAVA) through my school advisor around March 2017. Not only as a place of possible employment but also as a veterans organization that provided services for veterans like myself to make the transition smoother and also to provide resources I could use to confront my constant struggles. My advisor also knew IAVA’s Director of Human Resources because he also attended NYIT and went through the same program I was in. I monitored IAVA’s career page weekly until I saw they were hiring a Human Capital Coordinator. I applied and hoped for the best. After about a month, I heard back and interviewed in-person with key members of the organization. Within a few weeks, I got the job! I was so happy. Since moving to NYC in the Fall of 2016, I’ve lived in three different apartments and IAVA became my third job!

Finding IAVA was the push I needed to find contentment in my life. Not only do I get to work with fellow veterans and supporters, but I am also empowered to share my story so that those that feel the same know that it does get better and know that it is going to be okay. I am happy to report that I am now the Director of Human Resources at IAVA and I absolutely love my job. I still think about “fixing” my knee and going back to the Army but I undoubtedly think life is and will keep getting better as I keep adjusting to live without the Army. 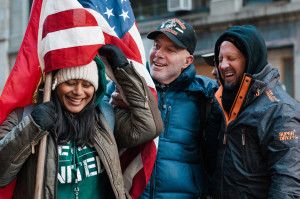 If you or a veteran you know needs resources or support, reach out to IAVA’s Rapid Response Referral Program (RRRP) today. Our Veteran Transition Managers are standing by to support.