Bottom Line Up Front (BLUF): This week IAVA members and staff went to “Storm the Hill” to advocate for IAVA member priorities to Members of Congress, particularly our #PayThemBack campaign. The National Defense Authorization Act (NDAA) passed the House and Senate, and the House passed Continuing Resolution (CR) has until midnight tonight to be passed by the Senate and signed by the President to avert a government shutdown. More on these developments: 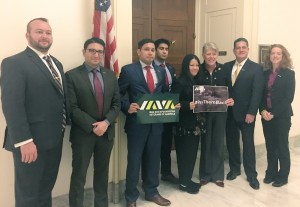 #PayThemBack: On December 8, 2016 the #StormTheHill team attended a House Armed Service Committee (HASC) hearing on the National Guard bonus scandal. The witnesses included military personnel and DOD officials. While the witnesses assured the committee members that DOD would pay back California Guard personnel and veteran the money they are owed, IAVA still has serious concerns this issue may extend to other states. The witnesses stated that it does not, but we will keep digging to make sure post-9/11 servicemembers and veterans are safeguarded.

National Defense Authorization Act (NDAA): The House passed NDAA was approved by the Senate this week with a veto-proof majority. The bill has been sent to the President where it will be signed into law. The bill contains no GI Bill cuts which ensures another victory for our #DefendTheGIBill campaign. This year’s NDAA also contains the Fairness for Veterans and California National Guard #PayThemBack provisions that we have been advocating for.

Continuing Resolution (CR): The CR passed by the House this week is currently in the Senate and it must be passed and signed by the President by midnight tonight to avert a government shutdown. Controversial parts of the CR package include provisions that would fast track General Mattis’ Secretary of Defense nomination next year.