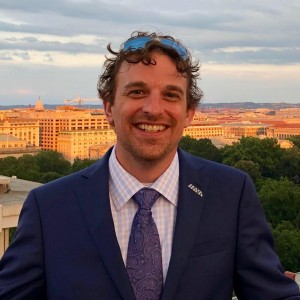 Tell us a little about you outside of the military:
I am an awarding winning landscape photographer who thrives in capturing images in complex situations. I am keynote speaker that uses motivational storytelling techniques to inspire people to believe in themselves and reach their potential. I have co-founded a fellowship program called Reach, Out, and Care (ROC) Warriors that gives purpose to Wounded Warriors through the building and delivering of wheelchairs to disabled children in developing countries.

Why are you Storming the Hill with IAVA?
On January 20th, 2018, I lost my best friend to suicide. He was the 14th veteran I have known to take his own life and the one who was there to lift me up after my own attempt in 2016. It is my hope to help give some perspective to lawmakers on the Hill how IAVA’s Big 6 all work together to help combat the epidemic facing the veteran community.

How did your military experience shape you to be the person you are today?
My military service taught me to never give up even in the face overwhelming odds. It has been this one lesson that I hold close to my heart and that I attribute most of my successes too.

Which one of IAVA’s Big 6 do you believe is the most pressing? Why?
Military/Veteran Suicide. We are losing a generation of leaders because we are failing at inspiring them to choose life. We fail at making them believe, it is possible to move past the lasting effects of war.
Which one of IAVA’s Big 6 do you have the strongest personal connection to? Why?
Medical Cannabis for Veterans. After three years of tests, doctors appointments, and lots of pain, in 2017 I was given a diagnosis of fibromyalgia for unexplained autoimmune issues. Cannabis would offer an option for pain relief, especially because becoming a daily narcotics user and dealing with those side effects is something I am not interested in doing.