Drew Lucas is a Marine veteran who uses his creative talent and life experience to shed light on the life and struggles of combat veterans through his blog, Patrols2Poetry. 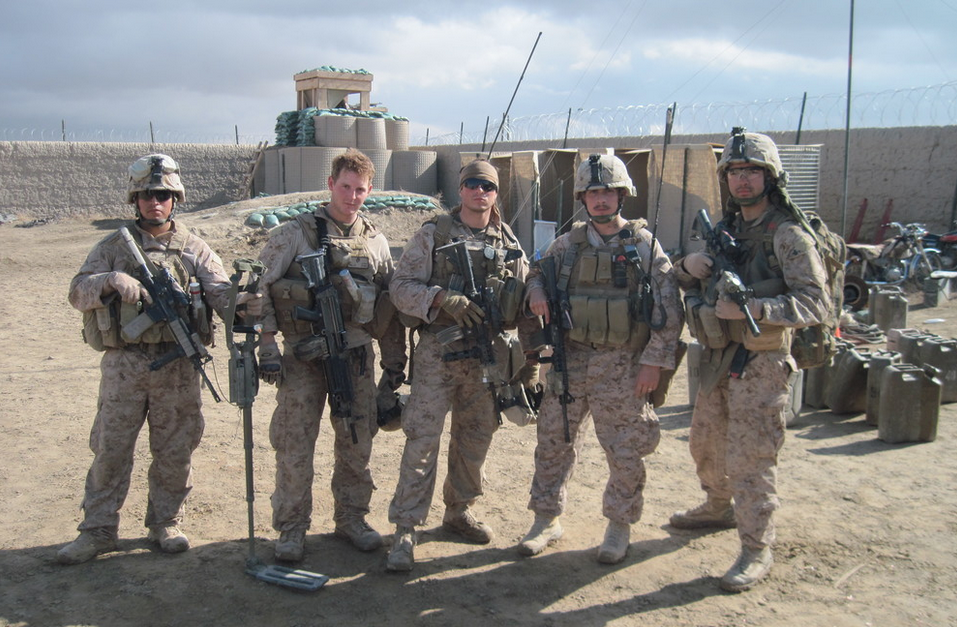 Once upon a time, a man walked into a crowded bazaar where children play innocently amongst the guiltiest of evil. Marines on mission guarding quality of life.

A suicide bomber.
Martyr, lost and misguided soul. Ball barrings pierced flesh.
Once a kind sprit, now consumed by hate and driven only by pain.
Dark years camouflaged purpose. Grit proved true, gratitude & growth provided forgiveness.
I began writing. Pain positioned poetry was born.
One Day, a Letter to God.
Made Amends.
Found Peace.
And here I am. Sharing. Loving. And trying to help a few along the way.

This is my story…

Weapons: check. I had more than I could carry. Body armor: check. Rage to hurt the innocent just to feel: check. Decision on the horizon, as tears shed in the California sunrise, on my knees, gasping for breath: panic attack for breakfast. A small government issued NCO (non commissioned officer) notebook was all I departed with that morning. Words from war, a weapon greater than any firearm. I shared war stories that day, my first time, and the pain eased slightly that night. I found something, I found a piece of me; looking back I was creating a reborn soul. A soul lost long ago.

War wasn’t the hardest part. We were lost souls returning home to fight a different fight; a battle that couldn’t be won by destroying the enemy by fire and close combat. Where fire teams, brothers in arms were replaced with isolation and dark thoughts. Rounds from our weapons became countless psych meds. Honor, courage, and commitment dissipated by worthlessness, rage, and survivors guilt.

December 26th 2009, a day my life was spared: my “Alive Day.” Death came to me by way of a pressure cooker, 25-pound IED. Enough explosives to destroy an up-armored humvee. Buried to deep by the enemy, detonating just seconds too late rendering me unconscious and ultimately suffering a mild-TBI. An evening carrying bullet hole ridden enemy combatants, daily rocket attacks, and first responders to a suicide bombing: proved a lethal cocktail of trauma.

Nightly visits from Taliban fighters would begin the very same day of the IED attack. Awakened from a sound sleep, a rough day, almost my last day. “You’re fucking dead!” I screamed. Just weeks before, carrying these lifeless bodies to their trash pit graves. And now, now those cold hands prevented me from breathing. Only the shouting of “Lucas, Lucas, Lucas!” by fire team members would calm my nerves. I returned home but not alone.

Keep the lights on. Deathly afraid of the dark, the next two years refused to sleep in darkness. Maybe it was the way we joked. Maybe it was the way we handled their bodies on the three-hour hump back. Maybe. Just maybe. But I knew all along why: sadistic mentality of a Marine fed up with being shot at with big ass rockets; 107mm Chinese rockets, type that punches your heart, as you helplessly hit the deck, big. Regrettably, haunted by my actions for years, not the act of war but stealing property from the dead.

Night terrors would provoke multiplies panic attacks affecting my daily task, which would make it nearly impossible to live a normal life once I returned home from war. Therapy would be the most difficult battle I would face thus far. Four years that followed, biofeedback, exposure therapy, and every type of refusal to call on my courage to remember my experiences. Numb to the world around me, family, friends, the love: nothing could pierce the fog of war. Strength and support from a brother, a Marine, provided me with the hope of a better future. A future with a new beginning in the City of Angels: Los Angeles, California. All the while still fighting the forgotten war of pts.

Hope provided a breath of air, in route to where dreams are made and overcoming adversity was as common as the homeless veteran in Los Angeles. Life turned worse before my vision was clear. Moving west, running from my past, yet running towards my dreams of an inner peace and happiness. Trapped in a cage of war. Writing became a key unlocking and releasing horrors of war. Horrors I wasn’t ready to fight on my own. My journey, my future, was at a pivotal moment; isolated, paranoid, and a sleepless two-day slump. I’ve had them before and somehow always managed to claw out. This time was different.

Intrusive thoughts weren’t foreign to me; at times I had thoughts of taking my own life to destroy the demons inside. I carried shame as to what war did to me and would tear at the mere thought of speaking on my experiences. College was hard. These kids didn’t understand, everyone was social, friends, love, and a vision for their future. I just wanted to get through a day, a class period, without the haunting cries, bloody bodies, and despair evading my head, my soul.

Battle Class: A Veteran Day tribute concert. Anger and pain fueled my motivation behind platforms created through Los Angeles community college to share my story. I thought of myself as a Marine trying to cope with combat. Not an inspiration. Not a voice. Not even an artist. But feedback from brothers, even strangers would prove otherwise. Humbling and tears of joy provided pride through the pain. As I went on speaking and performing, unfamiliar faces became brothers and sisters, a relationship bonded through words, born from pain. No matter how a civilian asked about experiences of war, fathoming such experiences was a world away of true understanding. Instead of actively listening to what you’re saying, people are thinking about how to respond to what you’re describing. Many are willing to ask however no one is ready for the response.

Rediscovering purpose is a large tribute to recovery. Remain focused and productive, recent launch of Patrols2Poetry.com, Veteran Advocacy of Americas 3rd Annual Economic Summit, and debut show: Might of A Marine: Journey through the Arts is incomparable. Embrace those who express the outreach to help. Vulnerability calls for courage. Opening your heart to those who matter will prove a great feat battling PTSD. Have patience, gratitude, and forgiveness for your past. You have to allow yourself to feel every bit of emotion in order to deal with them. Sharing your story, entire story, is just the beginning. The most difficult step is often the first but also the most imperative. Continue on a path of clarity, remember purpose, and stay true. And most of all, if you’re going through hell keep going.

Lucas reminds other veterans that they are not alone in their struggle and finding an outlet for the invisible wounds of war can be a life enhancing benefit for PTSD suffers. #VetsRising