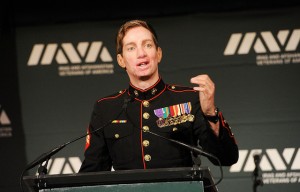 Good evening. My name is Aaron Mankin. I served in the United States Marine Corps as a corporal–and I am proud to continue serving as a member and spokesperson for IAVA. Too many big events start with a General, it’s about time one started with a Corporal!

On behalf of Iraq and Afghanistan Veterans of America and our over 400,00 members and supporters worldwide, I’d like to welcome you all to the Commander-in-Chief Forum!

IAVA is proud to be the host of this first-of-its-kind event. It’s a truly historic moment for our community–and for all Americans.

While serving in the US Marine Corps in 2005, I was wounded during an IED attack. I came home to over 60 surgeries. And yet, in many respects, my transition has been easy. You can see my scars, but many of us bear hidden wounds. And tragically, because of those wounds, we lose 20 of our brothers and sisters every day to suicide.

No matter who wins this election, let’s all commit to unite back here in New York, on Veterans Day.

Win or lose, we invite both candidates–to stand with our veterans–and march with us together in the biggest Veterans Day parade in America.

Thank you again for being here…and Semper Fi!