Veterans Organizations Form Coalition to Continue the Fight Against Coronavirus 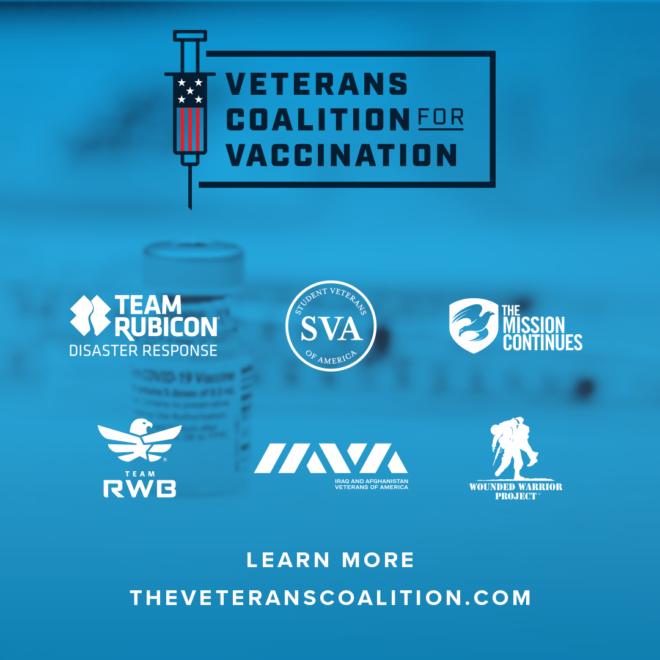 New York, NY—Iraq and Afghanistan Veterans of America (IAVA) joins five other leading veterans organizations—Team Rubicon, Student Veterans of America (SVA), Team Red, White & Blue, The Mission Continues, and Wounded Warrior Project to announce the creation of the Veterans Coalition for Vaccination (VCV), a coalition aiding local and state officials in distributing the COVID-19 vaccine nationwide. The participating veteran organizations are working toward the common goal of ensuring each American who wants the vaccine has equitable access to it.

The past year has already strained medical systems and resources, and vaccination distribution adds another layer of logistical complexity. By providing the resources and operational expertise of a million-strong-veteran coalition, the VCV will assist in ensuring access to vaccinations. This nationwide network of volunteers will allow the coalition to support vaccination requests from major cities to rural communities. A centralized volunteer management system has been established to streamline opportunities across the country.

“Iraq and Afghanistan Veterans of America (IAVA) is honored to team up with Team Rubicon and our other coalition partners in this important vaccination distribution effort,” said IAVA CEO, Jeremy Butler. “In continuing our pandemic response and the fight against COVID-19, IAVA looks forward to providing volunteer opportunities for our members, raising awareness and ultimately ensuring all Americans have access to vaccines.”

Doubling down on its commitment to encourage Americans to receive the COVID-19 vaccine, the VCV is also joining forces with the global advertising technology company Amobee and AdTechCares, an advertising industry coalition launched by Amobee in March 2020 with more than 50 partners. AdTechCares recently developed a Public Service Announcement (PSA) ad campaign to combat misinformation about the spread of COVID-19, and will now pivot to work with VCV to deliver an ad campaign ensuring credible information about vaccine efficacy is delivered across the United States.

Now with a greater sense of urgency, the VCV is looking for veterans to put on a new uniform and continue to serve. For more information, please visit https://theveteranscoalition.com