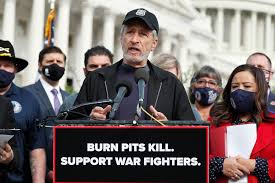 New York, NY — Unwilling to wait any longer for overdue action by the Department of Veterans Affairs, comedian Jon Stewart will lead a bipartisan coalition of veterans, members of Congress and civilian supporters in a Veterans Day rally and press conference in Washington, DC to demand legislative action bringing health care and benefits to those exposed to burn pits and other toxins.

“Saying thank you for your service will no longer suffice! The only true way to say thank you is to pass vital legislation that ensures ordinary people who do extraordinary things 24/7 to keep this Nation safe from harm’s way and now suffer from the toxic aftermath of Burn Pits. Anything less, then we failed as a Country.” Jon Stewart & John Feal.

Millions of veterans alive today were exposed to an incredible range of dangerous substances, often unknowingly, as a result of their military service. From burn pits to radiation to chemically-laced IEDs and other toxins, these exposures have resulted in deaths, illnesses, and disease to a large and rapidly increasing number of veterans across the country yet the Department of Veterans Affairs waits for more research and data and is doing nothing to treat the sick and dying.

“The damage is already done,” said IAVA CEO Jeremy Butler. “Millions of veterans have been exposed to dangerous toxins and an untold number have died. Very few of them received support from the government or VA and we need legislation to change that today.”

Veterans and their families cannot wait any longer. Congress must act to pass legislation bringing care to those who earned it.

WHAT:   Rally and press conference in support of legislation to protect veterans exposed to burn pits and other toxins

WHEN:   Veterans Day, November 11th. Time to be announced

WHERE: US Capitol, Washington, DC, location to be announced