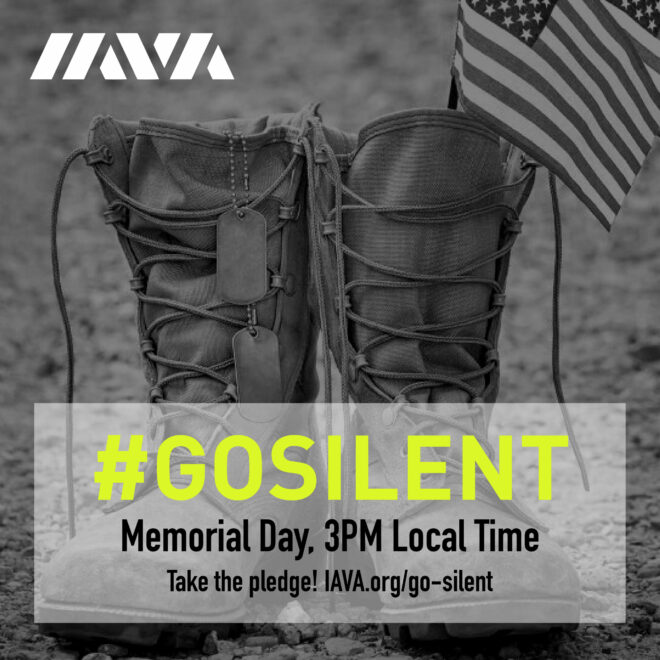 New York, NY –  Today, Iraq and Afghanistan Veterans of America (IAVA) kicks off their annual #GoSilent Memorial Day campaign to honor the veterans of the U.S. Armed forces who have lost their lives.

A decade-long tradition, IAVA continues to promote this annual moment of silence every Memorial Day. The organization calls on all Americans to join in the national moment of remembrance on May 31 at 3pm local time and take the pledge to honor the brave servicemembers who gave their lives for our great nation.

“This Memorial Day, we encourage all Americans to #GoSilent in honor of those we have lost. We hope you will stand with us to honor the brave members of our military who gave the ultimate sacrifice for our country,” said Jeremy Butler, CEO of IAVA. “But we must remember that the fight for our nation’s heroes isn’t limited to just one day. Through this annual campaign, we also aim to raise awareness about the sacrifices that our servicemembers make and to educate the public on how they can support veterans all year round.”

As part of its #GoSilent campaign, IAVA is urging participants to help spread the word and “go silent” to uplift and remember the lives of those lost in the U.S. Armed Services. A #GoSilent social media toolkit for Memorial Day is available at: iava.org/go-silent/#resources.