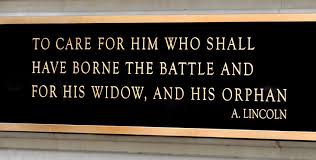 New York, NY – Today Iraq and Afghanistan Veterans of America (IAVA) celebrated passage by the House Veterans Affairs Committee (HVAC) long-sought legislation to update the current outdated VA motto to make it gender-neutral and make the Department more welcoming to the increasing numbers of women who have served in uniform. This effort was led by IAVA and was the cornerstone of IAVA’s ground-breaking #SheWhoBorneTheBattle campaign launched in 2017.

“For over three years IAVA has been calling for a refresh of the VA motto and today we commend the Committee for its bipartisan action in support of this important change, sponsored by Reps. Kathleen Rice and Brian Mast. Hopefully this is a first step towards a more inclusive motto representative of the post-9/11 generation,” IAVA Executive VP Tom Porter said. “Every veteran should feel welcome at the VA in an environment that celebrates the service of America’s female veterans as much as their male counterparts. This is a critical first step and much more work needs to be done.”

“It’s important to note that although VA Secretary Wilkie has the power to change the motto, it’s clear that he will not provide the leadership required to make it happen. Therefore a legislative solution is required. We call on House leaders to bring this up expeditiously for a floor vote and to work with the Senate to pass this before the end of this Congress. Our women warriors have been waiting far too long,” Added Porter.

Over 345,000 women have deployed since 9/11 and IAVA has been at the forefront pushing for a culture change to fully recognize and improve services for female veterans. Learn more about IAVA’s work on these efforts here.