Washington, DC (February 25, 2019) — Today, Iraq and Afghanistan Veterans of America (IAVA), the leading voice of the Post-9/11 generation of veterans, applauds the introduction of the Never Forget the Heroes: Permanent Authorization of the September 11th Victim Compensation Fund Act.

First responders bravely ran toward danger on September 11th, putting the welfare and survival of their fellow Americans before their own health and wellbeing. For months afterward, first responders worked through debris and wreckage from the 9/11 attacks, exposing themselves to toxins from the ash and debris that was everywhere. But they continued on and helped begin to heal a city after the most devastating attack on civilians in our nation’s history. We as a nation owe a great debt to these heroes. Ensuring 9/11 first responders have access to care and benefits is the least a grateful nation can do.

It is unacceptable that the 9/11 Victim Compensation Fund is running out of money which will result in benefit cuts to first responders, survivors and their families that are suffering from the physical impacts of toxic exposures from 9/11. The Never Forget the Heroes: Permanent Authorization of the September 11th Victim Compensation Fund Act will permanently establish and fund this important program so that no first responder will ever have this earned benefit stripped away from them.

“First responders did not think about their health or wellbeing as they worked to save thousands of people and bring closure to thousand more families in the immediate aftermath of the worst terrorist attack in American history. It is our duty as Americans to ensure that these brave men and women are taken care of. This is one small way we can and must say thank you to these heroes for their service and sacrifice,” said Jeremy Butler, IAVA Chief Executive Officer. “We applaud the introduction of the Never Forget the Heroes: Permanent Authorization of the September 11th Victim Compensation Fund Act by Senators Kirsten Gillibrand (D-NY) and Cory Gardner (R-CO), Senate Minority Leader Chuck Schumer, and Representatives Carolyn B. Maloney (D-NY), Jerrold Nadler (D-NY), and Peter King (R-NY) and call for its immediate passage by Congress.” 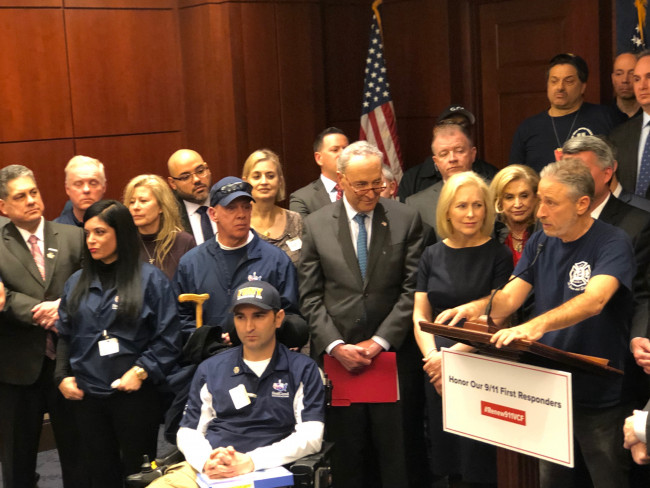