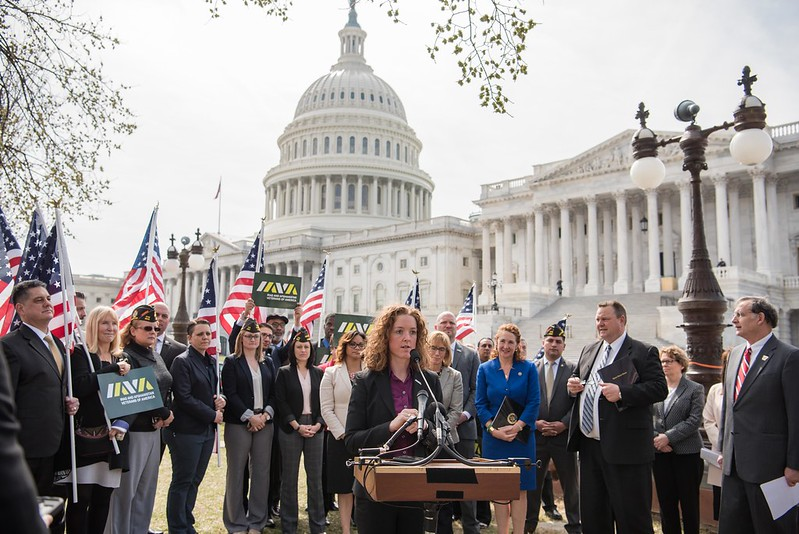 Washington, DC — On December 16, 2020, IAVA celebrated the final Congressional passage of the Deborah Sampson Act as part of a larger veterans benefits package.  The overwhelming House vote today follows Senate passage late last week, and the bill now heads to the president for signature. This groundbreaking legislation, and the cornerstone of IAVA’s She Who Born the Battle campaign, will significantly reduce barriers to care for women veterans while also expanding services to address issues like reintegration, homelessness, and newborn care.

“Although positive strides have been made in recent years, there continue to be large gaps in care for women veterans in our VA healthcare system,” said Jeremy Butler, CEO of Iraq and Afghanistan Veterans of America. “The passage of the Deborah Sampson Act takes a significant leap in providing the equal level of care and resources that the women who chose to serve this country rightly deserve.”

In a February 2017 Capitol meeting, Sen. Jon Tester (D-MT) met with IAVA leadership and made a commitment to address the severe gaps in healthcare for women veterans. The Deborah Sampson Act, named for one of the first women veterans, who disguised herself as a man during the Revolutionary War to fight for her country, was soon developed and quickly became IAVA’s flagship legislation. While fighting for the Deborah Sampson Act, IAVA has participated in over 600 Congressional meetings, testified before Congress 10 times, and spent countless hours making media appearances and working to raise public awareness on the issues facing women veterans.

“For nearly four years, IAVA has been fighting hard to see this legislation finally cross the finish line,” Butler continued. “IAVA applauds Sens. Tester and John Boozman, and Rep. Julia  Brownley for their steadfast and relentless efforts on behalf of women veterans. We celebrate this huge milestone but also recognize that there is still work to be done.

The Deborah Sampson Act includes provisions to address sexual harassment and assault in VA facilities, establish an Office of Women’s Health directly under the Undersecretary of VA for Health, and improve access to care and benefits for survivors of Military Sexual Trauma (MST).

The final Deborah Sampson Act provisions were included within an IAVA-supported veterans legislation package named for two veterans affairs leaders we have worked closely with over the years. The Johnny Isakson and David P. Roe, M.D. Veterans Health Care and Benefits Improvement Act (H. R. 7105) includes provisions that would provide assistance for homeless veterans, veteran job retraining assistance, and major education protections for student veterans affected by the COVID-19 pandemic. IAVA is proud to support this important legislation and thanks all those who have worked to pass it into law.