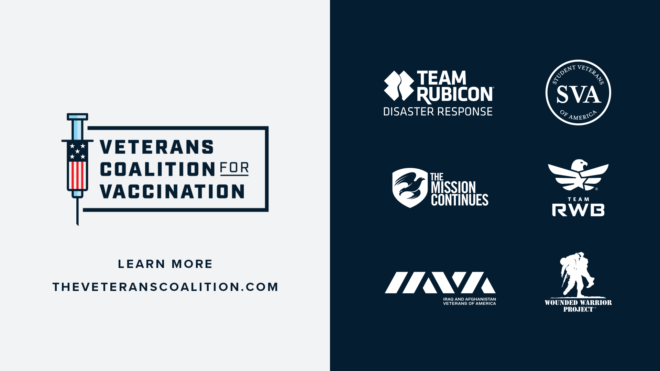 “In our continued efforts to fight against COVID-19, IAVA is proud to team up with Team Rubicon to continue the important work of vaccine distribution,” said IAVA CEO, Jeremy Butler. “We are honored to work alongside our coalition partners and healthcare allies to raise awareness, expand access, and ensure that all Americans have equitable access to COVID-19 vaccines.”

This Facebook Live event will provide an overview about the coalition and panelists will also discuss information about the vaccine, outreach to underserved communities, and a wide range of relevant topics related to vaccine distribution efforts. There will be time allotted for viewers to ask questions throughout the event.

“At Team Rubicon we firmly believe our veterans are an incredibly talented untapped resource and the Veterans Coalition for Vaccination gives us the opportunity to unlock that potential,” said Jake Wood, CEO and Co-Founder, Team Rubicon. “I am excited to see our Greyshirts work shoulder to shoulder with the IAVA members across the country to fight COVID-19. The VCV is truly a force multiplier and will allow us to reach hard-to-access communities to ensure every American who wants a vaccine has access to it.”

“This veterans coalition partnership and nationwide network of volunteers is a critically important part of our country’s response to the deadly pandemic that we’re facing,” said Dr. Patel, Fellow, Brookings Institution. “I applaud IAVA, Team Rubicon and the other coalition partners in raising awareness, providing factual information for the community and working to ensure equitable access to vaccinations.”

More information about the Veterans Coalition for Vaccinations can be found here.

WHO:        Jeremy Butler, CEO, Iraq and Afghanistan Veterans of America

WHERE:   Join the Facebook Live event here. The event is open to the press.

Jake Wood is cofounder and CEO of Team Rubicon, a nonprofit organization that utilizes the skills of military veterans to deploy disaster response teams. Under Wood’s leadership, Team Rubicon has responded to over 800 disasters since the 2010 Haiti earthquake and grown from eight to 140,000 members.  Team Rubicon has finished in the top three of the Nonprofit Times’ “Top Nonprofit To Work For in America” lists three years in a row. Wood is a leading veterans’ advocate who has briefed President Obama on veterans’ issues, met with former Presidents Bush and Clinton on disaster response and testified before the Senate. As a Sergeant in the United States Marine Corps, Wood deployed to Iraq and Afghanistan as a Scout Sniper and earned the Navy-Marine Commendation Medal.

Dr. Patel is a Nonresident Fellow at the Brookings Institution. Previously, she was the managing director of clinical transformation at the Center for Health Policy at Brookings. Dr. Patel is an advisor to the Bipartisan Policy Center and a member of Health and Human Services Physician Focused Payment Model Technical Advisory Committee.