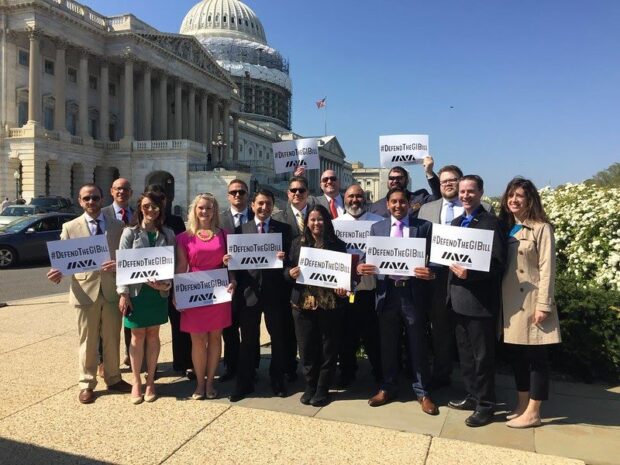 New York, NY – Iraq and Afghanistan Veterans of America (IAVA) is celebrating two massive victories for hard-fought priorities in the March 9 final Congressional passage of the $1.9 trillion American Rescue Plan to combat the COVID-19 pandemic. The emergency package includes a provision which will establish accountability for predatory schools that profit off of Post-9/11 GI Bill beneficiaries by finally closing the “90/10 loophole.” IAVA has fought to close this loophole in the law for many years after the enactment of the new education benefit attracted unscrupulous actors who had designs on military-connected students’ funding.

“Closing the 90/10 loophole has always been a top focus of IAVA’s long-held goal of defending the GI Bill from cuts and abuse. So many of our members know all too well stories of poor-performing schools overpromising and underperforming – and hurting student veterans in the process,” said IAVA CEO Jeremy Butler. “I would like to express our special gratitude to our friends at Student Veterans of America, Veterans Educational Success, Tragedy Assistance Program for Survivors, and all the other VSOs who stood shoulder to shoulder over the years to get this finally done.”

The legislation also includes the IAVA-backed Veterans Economic Recovery Act that will provide up to 12 months of retraining assistance for veterans who are unemployed due to the pandemic. The retraining program also includes a generous housing allowance. While the legislation will fund 17,500 eligible veterans, IAVA will continue working to expand that number.

“It’s clear that, in order to fight the effects of the pandemic, we must take new, bold approaches to ensure that a generation of veterans are not left behind,” added Butler. This will be an enormously impactful benefit for veterans, and we appreciate the bipartisan efforts by Senate Veterans Affairs Committee Chairman Jon Tester and Ranking Member Jerry Moran, and House Veterans Affairs Committee Ranking Member Mike Bost, to move this legislation over the finish line.”