NEW YORK (April 8, 2015) – TriStar Motorsports and Iraq and Afghanistan Veterans of America (IAVA) are proud to reveal a new paint scheme on the No. 14 Toyota Camry beginning this weekend at Texas Motor Speedway.

Founded in 2004 by an Iraq veteran, IAVA’s mission is to connect, unite and empower post-9/11 veterans. IAVA has become the leading post-9/11 veteran empowerment organization (VEO) with the most diverse and rapidly growing membership in America. Celebrating its 10th year anniversary, IAVA has repeatedly received the highest rating – four-stars – from Charity Navigator, America’s largest charity evaluator. 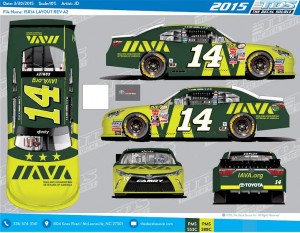 “Cale Conley is a true supporter of the veterans community, and IAVA is honored that he has donated space on his No. 14 Camry to our cause,” said IAVA CEO and Founder Paul Rieckhoff. “This partnership will spread awareness about critical veterans’ issues everywhere Cale races. Like our post-9/11 veteran members, Cale is a rising force in his field, and the entire vet community is rooting for him each race day.”

Conley expanded his relationship with IAVA beginning at Las Vegas Motor Speedway and is taking it to the next level with the paint scheme upgrade.

Conley’s Camry will run the green and yellow of IAVA indefinitely this season. As an avid supporter of current and former military, Conley is especially excited to represent them on Memorial Day and the Fourth of July, participating in veteran events and hosting veterans at the track.

“I am so excited about the new look of my Camry,” said Conley. “It really elevates the partnership and brings more attention to the car and the cause. Any time you can combine energy, color, and excitement onto the car, it is a good thing. I can’t wait to be in the seat again and helping to spread the word about a cause that is so close to me. Additionally, someone from my hometown designed the paint scheme. To see his ideas come to life and hit the track is so exciting. I can’t wait to get to Texas Motor Speedway and unload this new car!”