New York, NY (October 4, 2019) — Today Iraq & Afghanistan Veterans of America (IAVA) is announcing the results of a flash poll conducted this week on the war in Afghanistan. Recent media reports surrounding potential talks between the Trump administration and the Taliban and possible withdrawal of US coalition forces have spurred a national conversation about ending the longest-running military conflict in U.S. history.

In light of Monday, October 7th marking the 18th anniversary of the conflict, emails were sent to IAVA members inviting them to participate in this flash poll. The survey was available over a 42-hour period from 6 PM on Oct 2 to 12 PM on Oct 4.

“As the war in Afghanistan continues to dominate headlines, The perspective of post-9/11 veterans on this issue can’t be overstated. The voices of the veterans of this conflict deserve to be heard by the public, media and our national leadership and IAVA is committed to ensuring that happens,” said Jeremy Butler, IAVA CEO.

The results of the poll are depicted below. 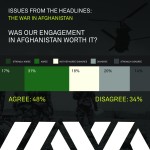 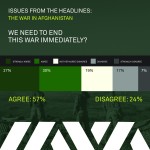 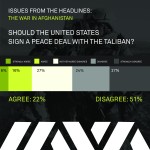