New York, NY (July 13, 2016) — Today, Iraq and Afghanistan Veterans of America (IAVA) began a national ad campaign calling on Senators Johnny Isakson (R-Ga.) and Richard Blumenthal (D-Conn.), Chairman and Ranking Member of the Senate Committee on Veterans’ Affairs (SVAC), to oppose any cuts to the Post-9/11 GI Bill. The ads, paid for by non-partisan IAVA, ran today in the Hartford Courant and Marietta Daily Journal — the Senators’ hometown newspapers. Since February IAVA, the leading voice for post-9/11 veterans and their families, has fought attacks on the GI Bill including the drastic $3.4 billion cuts contained in the so-called ‘Veterans First Act.’

“Congress is breaking its promise to veterans,” said Paul Rieckhoff, Founder and CEO of IAVA. “It is outrageous that as troops continue to fight and die overseas, Senator Isakson continues to put forth plans to revoke the hard earned benefits of our service members. And, with over 189,000 veterans in the state of Connecticut, Senator Blumenthal should know how critical these education benefits are.”

As the ads state: “This disgusting attack on our earned benefits would hurt our military recruiting, retention and morale. Its stupid. And, it’s wrong.”

Versions of both ads appear below: 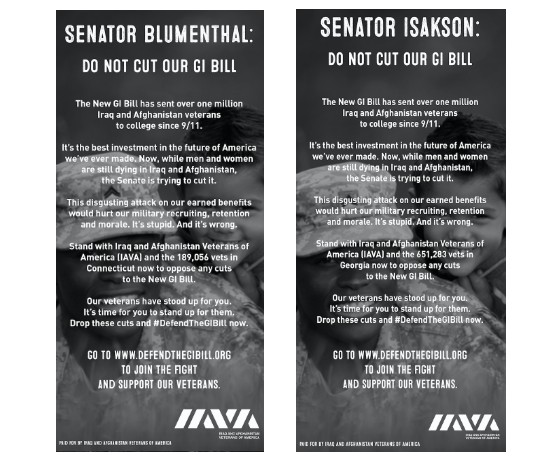 Protecting military and veterans education benefits is a top policy priority for IAVA and its 425,000 members. IAVA, which led the passage of the Post-9/11 GI Bill in 2008, has sought to focus national attention on congressional attempts to cut the earned veteran benefit. IAVA seeks to prevent cuts to the GI Bill in the last few days before the summer recess.

The Post-9/11 GI Bill has been used by nearly one million veterans and their family members to accomplish educational goals and chart new career paths. Since IAVA launched the #DefendTheGIBill campaign, IAVA members have sent more than 31,300 messages to Congress asking them to take a stand and opposed any cuts to the Post-9/11 GI Bill and promise to never use veterans’ benefits as a piggy bank.

Learn more about the fight to protect the GI Bill and the members of Congress who have taken the pledge to oppose the cuts here.