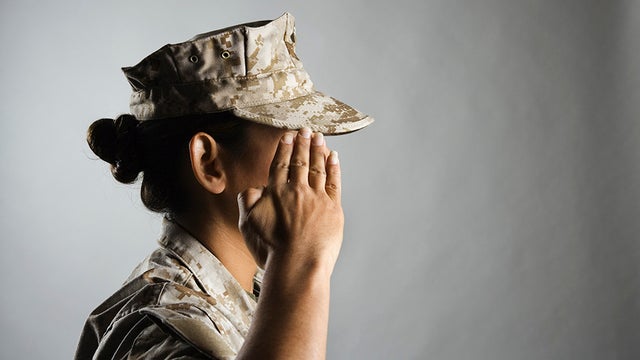 In the ten years that Iraq and Afghanistan Veterans of America (IAVA) has conducted annual surveys, veteran suicide has always topped the list as the most pressing issue in the membership community. This week, IAVA released our 10th annual member survey, and the results are troubling: veteran suicide numbers continue to rise as the overall veteran population is decreasing. Year after year, IAVA has seen a rise in members who report suicidal ideation or who know a fellow veteran who died by suicide, and the data shows that the post-9/11 generation of veterans is at the forefront of this crisis.

Despite the bleakness of our findings, solutions are not out of reach. Between veteran organizations like ours, policy makers and the VA itself, we must address the many added sources of stress a veteran sometimes carries when they separate from the military. They can have trouble accessing health benefits, finding employment, or obtaining housing. Veterans can also find it difficult to develop a sense of community and achieve the same sense of purpose and belonging that military service often brings.

To respond to their needs both adequately and expediently, we must pay attention to the unique problem set of veteran access to quality services and individualized care. IAVA’s survey results show that once they are able to access the system, veterans are pleased with VA care – 86 percent of respondents reported care as average or above average, an increase of 5 percent from 2019. This is a promising start, but more needs to be done. Not every veteran is eligible for VA care, travel and wait times can be excessive, and some veterans do not wish to use the system following previous substandard care or treatment from VA. We must ensure that every veteran receives excellent care and is able to access holistic support to address his or her individual needs.

One way to do this is by passing The Commander John Scott Hannon Mental Health Care Improvement Act. This bill addresses the crisis by establishing innovative new suicide prevention initiatives, improving access to mental health care, and holding the VA accountable.

Another way we can provide support is through person-to-person connections for veterans who need help, both during times of crisis and well before. IAVA’s Quick Reaction Force (QRF) connects veterans to life-saving mental health resources and provides 24/7 peer support. But in order for programs such as QRF to fulfill their promise of aid to all who require it, these programs must be fully funded, especially while the suicide crisis continues to trend upwards.

Forty-four percent of IAVA members report having experienced suicidal ideation since joining the military, which is a shocking 13 percent rise since 2014. Sixty-two percent report personally knowing a veteran who has died by suicide, which is a distressing 22 percent rise since 2014. These numbers are tragic. We must band together to get this crisis under control, both through passing meaningful legislation and ensuring our service members have the resources they need to survive both on the battlefield and off.

The veteran suicide crisis has begun to feel like another example of our society lurching from crisis to crisis, with the topic coming to the surface only after a tragedy has occurred. Legislators and donors alike need to come together to get ahead of this issue and create meaningful change by passing The Commander John Scott Hannon Act, supporting veteran service organizations and maintaining a high volume in our discussion of this topic. They have served us and our country; it’s time we serve them.

This piece originally ran in The Hill publication as an op-ed on March 4, 2020.