Election Day 2018 is in the rearview mirror and it’s time to look at what the results mean for veterans and servicemembers for the next Congress starting in January. The big news is that more veterans ran in 2018, including historic numbers of post-9/11 and women veterans, with 173 running for federal offices in either the House or the Senate. Veteran candidates running across the nation represented all eras, parties, and demographics, much like veterans across the country. While overall the number of veterans in Congress is historically low and on a steady decline, there are a lot of promising things in the numbers below.

Out of the 173 veterans that ran federally, 85 of them served in the post-9/11 era, with 77 and 38 winning their respective races. Additionally, 53 post-9/11 veterans ran for the first time and 12 of them won their races so far! It’s also important to note that 10 veterans are still in tough races that have yet to be called, so we could see these numbers rise. Check out the chart below for a full breakdown. 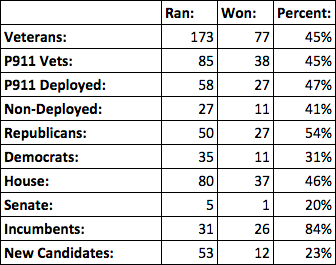 With the Democratic Party taking control of the House, we expect some shake-ups in leadership too. Rep. Nancy Pelosi (D-CA) is expected to become the Speaker of the House once again, with a formal vote coming in January. Meanwhile, in the House Veterans’ Affairs Committee Rep. Mark Takano (D-CA), the current Vice-Ranking Member is poised to Chair the Committee, as the current Ranking Member, Rep. Tim Walz (D-MN) moves on to become the next Governor of Minnesota. And the House Armed Services Committee (HASC) will likely send Rep. Adam Smith (D-WA) to the Chairman position as he is the current Ranking Member on HASC in the Minority Party.

Additionally last night, three states legalized cannabis either medically or recreationally. North Dakota also had a ballot measure to legalize cannabis, but fell short. However, these are big wins for IAVA’s #CannabisForVets campaign as veterans in Michigan, Missouri, and Utah will now have legal access to cannabis as a treatment option.

Continue to make your voice heard by taking our 2018 IAVA Member Survey. Join now to SOUND OFF! And stay tuned to IAVA and ensure that your voice is heard on all of IAVA’s Big Six priorities in this Congress and the next by going through our Take Action page!