Read: “O, what portents are these?”: Using Shakespeare to Process Trauma 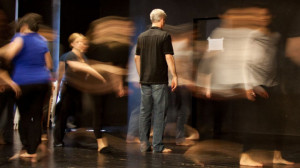 Tell me, sweet lord, what is’t that takes from thee
Thy stomach, pleasure, and thy golden sleep?
Why dost thou bend thine eyes upon the earth,
And start so often when thou sit’st alone?
Why hast thou lost the fresh blood in thy cheeks
And given my treasures and my rights of thee
To thick-eyed musing and cursed melancholy?

With this monologue from Henry IV, Part I, Lady Percy, observing her husband, Sir Henry Percy, veteran of wars in Scotland and France, as he struggled with the invisible wounds of war. The picture Lady Percy paints matches up almost symptom for symptom of Post-Traumatic Stress Disorder (PTSD). Sir Percy fought in the 14th and 15th centuries, Shakespeare wrote Henry IV, Part I in the 1590s, and PTSD was not an actual diagnosis until 1980, but Lady Percy’s monologue illustrates that war trauma has been something soldiers have always been struggling with.

I was introduced to this monologue in 2016 when I took part in a program called DE-CRUIT. Founded by Stephan Wolfert, actor and U.S. Army Veteran, DE-CRUIT uses the timelessness of Shakespeare, classical acting training, and elements of cognitive behavioral therapy to help veterans process trauma and the complicated process of readjusting to civilian life. With a background in mental health, I was completely taken with the program and eventually went through the training to be DE-CRUIT instructor.

The basic premise of DE-CRUIT is that theater is medicine. Classical actor training focuses on camaraderie, mindfulness, and using Shakespeare’s language to keep a distance between the aesthetics and the actor’s own experiences. In many ways, these are the same goals of many different evidence-based and group therapy models. The other major theme in DE-CRUIT is that the military basic training process wires us for war but there is no process by which service members are rewired for civilian life.

Here at Iraq and Afghanistan Veterans of America (IAVA), our 2019 Member Survey reflects the flaws in the process of reintegrating our veterans. 78% of our responding members said they experienced some or many challenges when transitioning out of the military. Among the top challenges reported were loss of identity and purpose as well as reintegrating with the community and relating to non-veteran civilians. I also hear this daily from veterans I work with for IAVA’s Rapid Response Referral Program (RRRP), as I provide them guidance, support and critical connections to quality resource to assist with transition related challenges.

Why I, in this weak piping time of peace,
Have no delight to pass away the time,
Unless to see my shadow in the sun
And descant on mine own deformity.
And therefore, since I cannot prove a lover
To entertain these fair well-spoken days,
I am determined to prove a villain
And hate the idle pleasures of these days.

In his famous “winter of discontent” monologue, Richard III, a military veteran, discusses how a soldier who excels in war can feel like an out of place monster in peace. This play, particularly this speech, served as the genesis of the DE-CRUIT philosophy. In an interview with Psychotherapy Networker, he reported:

I didn’t realize, after a friend of mine was killed at a military training center, that I was having a psychotic break. Drunk somewhere in Montana, I ended up hopping off a train and wandering into a performance of Richard the Third. If you know the play, you know Richard was a veteran of war. I didn’t know that at the time. All I remember is a guy in uniform walking out on stage, looking me directly in the eye, and saying, “The war is over, and there is a time of peace, and it’s fantastic. Everyone’s happy, except me, because I feel deformed, because I don’t fit in, because I’m not attractive. I don’t even like peace.”

Seeing so much of himself in the character of Richard III, Stephan realized his calling. He subsequently resigned his commission and attended graduate school for acting. Working with other veteran organizations and schools, he has developed the curriculum for DE-CRUIT building off the work of Shakespeare and Company as well as programs in prisons and schools that use theater as medicine.

DE-CRUIT is always looking to expand its craft and find the best ways to help veterans readjust to civilian life. Currently, DE-CRUIT classes in New York are working with professional voice coaches trained in the Linklater Method in order to find themselves through freeing their voice. The work, in acting, is getting in touch with the moment, being able to feel and play with different emotions, and not being restrained by your own feelings. In many ways, this is similar to the goals of most psychotherapies. When we have difficulty processing our emotions, we restrict ourselves. In trauma, this manifests in avoidance behavior. Using these vocal techniques to free the voice, DE-CRUIT is studying if that freedom also helps veterans become more comfortable in their bodies and emotions.

DE-CRUIT is currently running programs in New York City and Fort Worth, TX. For more information, you can visit their website at https://www.decruit.org/