American women have been courageously signing up to serve our nation’s military with the same integrity and honor of their male comrades since the start of the Revolutionary War but are often demoted to an inferior, or nonexistent, veteran status. Within our IAVA Member Survey only 27% of IAVA female veterans agreed that the civilian public treats women veterans with respect and less than half agreed male servicemembers treat women servicemembers with respect. Yet, 97% of IAVA women members identify as veterans. Women are the fastest growing segment of the veteran population with more than 340,000 serving in Iraq and Afghanistan, a trend that will continue in upcoming years.

Women in the Military

Recently, Operation Iraqi Freedom/Operation Enduring Freedom (OIF/OEF) concentrated less on the traditional “front line” battle tactics but required a continued vigilance and readiness for combat in an instant’s notice. Women fought beside male soldiers in battle, operated the same weapons, wore the same uniforms and embarked on the same dangerous assignments. As just a few examples, Sgt. 1st Class Hester was awarded the Silver Star for leading a direct-ground counterattack against insurgents who ambushed her convoy; Army Spc. Johnson was taken as a POW for 22 days after being shot in both legs by Iraqi militants. Army 1st Lt. Ashley White Stumpf was killed during a Joint Special Operations Task Force mission in Afghanistan and posthumously received the Bronze Star Medal, the Purple Heart, the Meritorious Service Medal, the Afghanistan Campaign Medal, and the Combat Action Badge. While the overall landscape of warfare has changed, and women’s representation has progressed in the military, we must not fool ourselves into the assumption that we have achieved gender parity in our armed forces.

Although DoD formally opened all combat positions to women in 2016 to IAVA’s support, covert sexism still resides in other military practices allowing women soldiers to be virtually ineligible for such positions. From the start of boot camp, the prior APFT set different standards, expectations and responsibilities to evaluate the performance of male and female soldiers. This unashamedly implies that women are not expected to perform at the same level as males and preserves the legacies of scarce respect for female soldiers. Although marketed as benefitting the inclusion of women, this application of ‘leveling the playing field’ actually detriments building the most talented combat team. The irony of these inequitable policies advocates equal opportunity while compromising the safety, welfare and combat effectiveness of our military units by accepting such sizable gaps in physical performance requirements for different genders.

Even with these obstacles forced against them, women soldiers have far exceeded expectations with more than 600 women being transferred into combat occupations and more than 70 training to become infantry officers in 2017. These numbers continue as rise as women servicemembers continue to prove their strength and resilience—even with the odds stacked against them.

Luckily, advances in the science of physiology led the U.S Army to reform their old PT training to more accurately measure and predict a soldier’s capabilities. The new Army Combat Fitness Test measures “Warrior Tasks” that gauge 10 components of physical fitness relative to a soldiers actual duties in combat including; muscular strength and endurance, power, speed, agility, aerobic endurance, balance, flexibility, coordination and reaction time. Although the previous test was cost effective and required minimal equipment, it only measured two of these components; strength and endurance– which biologically, height and weight ratios gave males a general advantage. Push-ups, sit-ups and a timed 2-mile run could not precisely assess an individual’s overall fitness and health, never mind tell a soldiers required preparedness for combat. Further, this test held individuals against a normative public standard compiled from thousands of previous test results. Physical fitness is not synonymous with talent or combat effectiveness, which is why the APFT only predicted about 40% combat readiness for all servicemembers. 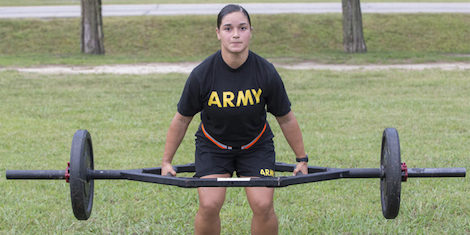 Photo courtesy of the U.S. Army

The new ACFT no longer compares you to the theoretical average soldier. It is no longer you versus someone else. It is you versus the mission. It is a measurement of you and what the Army actually needs you to do which has shown an increased 80% prediction rate in combat readiness. This new test features 6 events measuring the 10 “Warrior Tasks” that are designed to mimic experiences soldiers face while deployed such as evacuating casualties from a vehicle, moving under and around obstacles, and grappling in hand-to-hand combat.

The tasks, the assessment and the scoring hold each individual to the status of soldier and not to the status of male or female. Removing dated, rudimentary notions of fitness, the Army’s new model actually trains and prepares our servicemembers to serve which has shown a reduction in lower extremity injuries, heightened combative fitness and lower likelihood of injury when deployed. Further, implementing a healthier social philosophy, the ACFT measures physical fitness without marginalizing and segregating the strength of our soldiers through a gendered lens.

Currently, 60 platoons across the U.S are implementing ACFT field tests. This new test no longer equates physical fitness with the narrow definition of brute force but focuses on building the most effective and talented combat team by giving equal opportunity to all servicemembers. For years, women servicemembers have gone above and beyond the challenges placed in front of them, but now the ACFT allows every servicemember to achieve and excel independently while also building a cohesive, stronger task force.

Progress at the VA

In 2017, IAVA launched our groundbreaking public awareness campaign, #SheWhoBorneTheBattle, focusing on bringing widespread cognizance in recognition of women veterans and reforming the deficient access to care provided by VA. However, while some improvement has been made in our military, overall the nation has not offered our support, or our recognition, for women in our military. The lack of understanding and accepting these women as veterans by our citizens, our Congress, and the agencies supposedly there to serve them, points to a much larger cultural problem that rejects women for disregarding traditional gender norms—even if it corresponds with protecting our country.

This lack of acknowledgement not only impacts their ability to receive health care and benefits from VA, but further burdens the issues affecting many transitioning veterans such as homelessness and mental health. Today’s servicemembers are tomorrow’s veterans and while the military is becoming more inclusive, the VA is still lagging behind. Unfortunately, VA’s stance is widely exemplified in their refusal to change its outdated, gendered motto; “To care for him who shall have borne the battle and for his widow, and his orphan.” Engraved on VA buildings, featured proudly in presentations and the agency’s website, it is clear cultural change within the department is necessary to demonstrate the evolution of women’s service in the military and current veteran demographics.

IAVA has partnered with leaders of Congress to advance the bipartisan Deborah Sampson Act to honor every woman who has worn the uniform to the same degree as the men who had served next to her. As a nation, we must care for #SheWhoBorneTheBattle with equal compassion as he who has. However, it’s difficult to support her if we don’t even acknowledge she’s there.

It’s well overdue for our nation to understand the changing face of our military and recognize the strength, determination, skills and leadership that our women veterans embody.