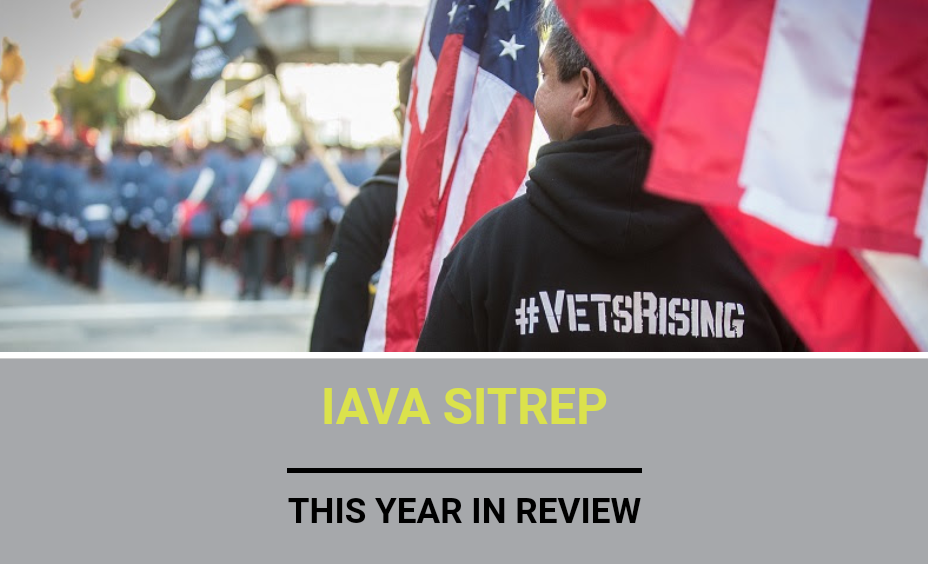 As the leading voice for the post-9/11 veteran community, IAVA continues to facilitate change and create awareness about issues and topics impacting our community. Below are highlights from the last year:

(IAVA Media) IAVA Celebrated One Year Since Website Relaunch and Announced Newest Offerings: “As a leading VSO, we are constantly looking for ways to improve accessibility for our members. With our updated website, veterans can access the care they need more quickly and efficiently than ever before, with support available 24/7,” said Sean Ullman, COO for IAVA…Watch here.

(IAVA Press Release) IAVA Joined Members of Congress, Jon Stewart & John Feal to Unveil Toxic Exposures Legislation: “No one in Congress should pretend to honor the sacrifices of our troops on this 20th anniversary of the 9/11 attacks while not supporting these injured veterans,” said Tom Porter, EVP of Government Affairs for IAVA…Read more.

(IAVA Press Release) IAVA is Proud to Support the Introduction of the Military Justice Improvement and Increased Prevention Act: “We need to do this for the soldier that wants accountability from her command, for the airman that faces threats from within their command, for the sailor who wants her kids to be safe following in her footsteps, and for the Marine who just wants to do her damn job,” said Tom Porter, EVP of Government Affairs for IAVA…Read more.

(IAVA Media) Top Leaders From IAVA Discussed the U.S. Withdrawal From Afghanistan: “We have not fully discharged our moral obligation to the battlefield interpreters in Afghanistan,” said General David H. Petraeus, U.S. Army (Ret.), Board Member for IAVA…Watch here.

(IAVA Testimony) IAVA Submitted Written Testimony on Improving Health Care for Women Veterans: “It is crucial we recognize the unique issues our female veterans and servicemembers face so the institutions they rely on can meet them with the support and respect that they have earned,” said Kaitlynne Hetrick, Associate of Government Affairs for IAVA…Read more.

(IAVA Events) IAVA Hosts the Bob Woodruff Foundation and Dr. Kavita Patel to Raise Awareness of Vaccine Safety and More: “We are honored to join forces with this incredible organization to raise awareness about the impacts of the pandemic and provide valuable information to veterans and their families about vaccines,” said Jeremy Butler, CEO of IAVA…Watch here.

(IAVA Media) IAVA CEO Jeremy Butler Explains the Importance of Prioritizing Equality for LGBTQ+ Troops: “For our country to truly respect the contributions of the dedicated individuals who serve, those protections must apply both inside and outside the military,” said Jeremy Butler, CEO of IAVA…Read more.

(IAVA Media) IAVA Hosts Facebook Live on LGBTQ Inclusivity and Non-Discrimination: Jeremy Butler, CEO of IAVA, joined LGBTQ military advocates to talk about how inclusion and diversity make the military stronger, the necessity of non-discrimination and next steps for equality in the military…Watch here.

(IAVA Media) IAVA and Team Rubicon Discussed Ways to Support Our Afghan Allies: “IAVA is proud to team up with Team Rubicon to get important information out to the community about the status of evacuation and resettlement efforts, as well as volunteer opportunities and other ways to help,” said Jeremy Butler, CEO of IAVA…Watch here.

(IAVA Partnerships) IAVA and 2U Connect Veterans With High-Quality Educational Offerings: “Through this partnership, IAVA and 2U will continue to work together to provide valuable information and education opportunities for IAVA members,” said Jeremy Butler, CEO of IAVA…Watch here.

(The Well News) Changing Military Fuels IAVA Fight for Veterans’ Needs: “The VA needs to accept that burn pits and toxic exposures are universal elements behind veteran health issues, and we need to acknowledge this and improve the delivery of care,” said Sean Ullman, COO of IAVA…Read more.

(CNN) IAVA Discussed President Biden’s Recent Announcement of a Military Toxic Exposure Review: “The reality is that this is a nice first step but there is a lot more that needs to be done. Unfortunately, if you read the fine print there are a lot of things that don’t say what we need to hear,” said Jeremy Butler, CEO of IAVA…Watch here.

(FOX) IAVA Discussed the Fight for Health Care for Women Veterans: “We have all heard the stories of women being asked if their husband is coming with them or being berated as soon as they walk through the doors of the VA,” said Kaitlynne Hetrick, Associate of Government Affairs for IAVA…Watch here.

(CNN) IAVA Discusses the New Afghan Sponsorship Program: “The key to the success of the Afghan resettlement process and the key to our Afghan Allies not ending up in endemic poverty is them being paired with a U.S. military veteran,” said Matt Zeller, Senior Advisor for IAVA…Watch here.

(USA Today) Advancing Equity: The Black Community’s Road to Recovery: “The Black community, including veterans, has been impacted by COVID-19 and unemployment, and there is a need for more equity in access to health care,” said Jeremy Butler, CEO of IAVA…Read more.

(USA Today) Female Veterans Served America, but the VA Doesn’t Serve and Protect Them﻿: “IAVA is calling to change the VA motto to be gender-neutral, fully recognizing all veterans that have served and ensuring that women feel VA is also a place for them,” said Kaitlynne Hetrick, Associate of Government Affairs for IAVA…Read more.

(NBC) IAVA Calls for Congressional Action on Helping Veterans With Toxic Exposures: “We are not going to let up. This is the biggest health impact for our generation of veterans,” said Tom Porter, EVP of Government Affairs for IAVA…​​​​Watch here.

(PhilanTopic) What Does ‘Jumanji’ Have to do with Advocacy?: “When our veterans signed up to protect the country, they didn’t expect to be exposed to toxic substances and practices overseas that often lead to long-term ailments,” said Sean Ullman, COO of IAVA…Read more.

We can’t do this work alone. Please consider donating today so we can continue fighting for the veteran community together.

AND THANKS TO CRAIG NEWMARK PHILANTHROPIES YOUR GIFT WILL BE DOUBLED!