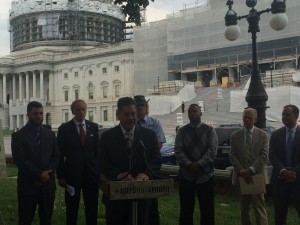 Franklin D. Roosevelt signed the GI Bill into law on June 22, 1944. Since then, the landmark education benefit has been recognized as one of the most significant pieces of legislation passed by Congress. IAVA also led the fight to update the GI Bill for today’s veterans, resulting in the 2008 passage the Post-9/11 GI Bill. Today, the Post-9/11 GI Bill has benefited over one million veterans and their families.

However, many veterans are being taken advantage of by a loophole in federal law known as the 90/10 rule, which allows for-profit schools to deceptively recruit veterans, service members, and their families to enroll in poor educational programs at exorbitant costs. Congress passed the 90/10 rule in 1998 as part of the Higher Education Act, which placed a cap on the amount of money for-profit institutions could receive from federal funds at 90 percent. But, funds from VA educational benefits do not count as part of this 90 percent, thus creating the loophole.

IAVA spent the 72nd Anniversary of the GI Bill at a Capitol Hill press conference with Senators Tom Carper (D-DE) and Richard Blumenthal (D-CT) calling for the closure of the 90/10 loophole.  At the event, Sen. Carper mentioned a need to improve the transparency and accountability for for-profit colleges. “We’ve seen too many bad actors take advantage of the revenues from taxpayers by recruiting our veterans and service members,” he said.

Last year, Senators Carper and Blumenthal introduced the Military and Veterans Education Protection Act (S. 1664) to close the loophole. “The idea is that 10 percent of this money is supposed to come from non-taxpayer sources and the folks that gain this system are able to persuade veterans and use them as targets of opportunity so that they circumvent that 10 percent requirement,” Sen. Blumenthal said.

IAVA Legislative Director Tom Porter said that “education is the best tool veterans have to transition to civilian life and develop the skills to find a new career. IAVA is committed to ensuring that every veteran can take advantage of their full earned benefits. That means refusing to allow predatory for-profit colleges from targeting GI Bill benefits and failing to deliver on promised quality education.”

IAVA members directly affected by the loophole were also in attendance. Matt Mitchell, a 15 year veteran of the Indiana National Guard, went to a for-profit school and also worked for one. “Veterans that were coming through the doors were widely misled as to what they were getting into. They were told they could get jobs, that their credits would transfer, but a lot of the time it was simply not true,” stated Mitchell. IAVA member Howard Teller attended ITT Tech after serving six and a half years in the Army. “I simply ask that we review the processes of these colleges and the accreditation process that takes advantage of unaware veterans. It’s essential that we implement better safeguards for our veterans who are returning home.”

IAVA will continue to push Congress to pass the Military and Veterans Education Protection Act and to #DefendTheGIBill.