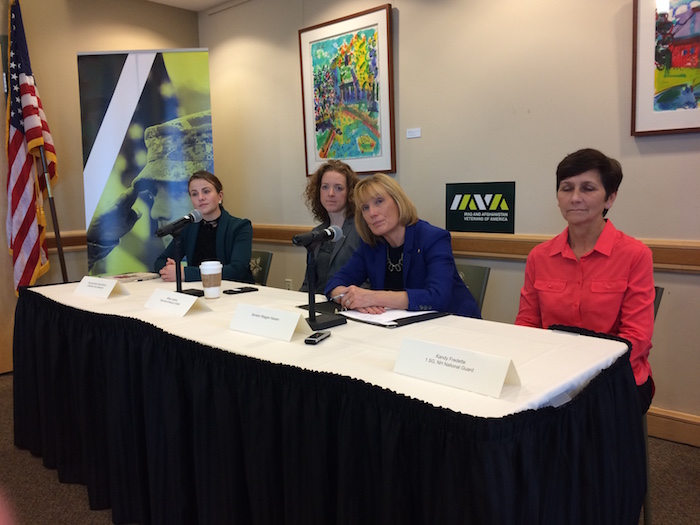 Manchester, NH (October 30, 2017) – Today, Iraq and Afghanistan Veterans of America (IAVA) Executive Director Allison Jaslow joined Senator Maggie Hassan and women veterans in Manchester, NH to highlight the need for better access to quality care and services for women at Veteran Affairs facilities across the country, and to bring attention to IAVA’s She Who Borne the Battle campaign.

Senator Hassan and IAVA’s Jaslow discussed the bipartisan Deborah Sampson Act, co-sponsored by Senator Hassan, ​which would help address gender disparities at the VA and ensure that women veterans are receiving appropriate care. IAVA pushed the legislation as a key part of its She Who Borne the Battle campaign.

“Women have served bravely in our military for centuries, dating back to Deborah Sampson’s service during the American Revolutionary War, and it is long past time that we honor their sacrifice by providing quality services at VA facilities for women veterans,” said IAVA Executive Director Allison Jaslow. “Today’s women veterans face unique challenges and lack the adequate access to quality care that they deserve. IAVA strongly supports the bipartisan Deborah Sampson Act and the much-needed reforms it would make to recognize the service of she who shall have borne the battle.”

“Veterans across New Hampshire and America have demonstrated a selfless commitment to keeping our nation safe, secure and, free, and we must ensure that every one of our veterans – including women – receive the care that they need and have earned,” Senator Hassan said. “VA facilities across the country have much more work to do to provide women veterans with the quality health care services that they deserve, and the bipartisan Deborah Sampson Act would be a critical step toward achieving that goal. I’m proud to join the IAVA and women veterans in speaking out about the reforms that are badly needed at many VA facilities, and I will continue to stand behind these brave soldiers who have sacrificed so much.”

Senator Hassan and IAVA’s Jaslow penned an op-ed in the Union Leader today drawing attention to the need for reform at VA facilities for women veterans, including enhanced privacy, added primary care providers on staff, improved mental health treatment and peer-to-peer counseling, and expanded infant care, which would be addressed under the Deborah Sampson Act.