The Wait We Carry 2.0 Launched by IAVA

New York, NY (March 17, 2015) – Today, Iraq and Afghanistan Veterans of America (IAVA) CEO and Founder Paul Rieckhoff unveiled IAVA’s newest version of The Wait We Carry website, www.thewaitwecarry.org, at TED2015 in Vancouver, Canada. The data visualization tool captures the personal experiences of veterans using the Department of Veterans Affairs (VA) health care system and those who have submitted disability claims for combat-related injuries. Created with support from the John S. and James L. Knight Foundation and in partnership with Periscopic, an industry-leading information visualization firm, the tool offers users a candid understanding of the veteran health care experience. The website was previewed on Sunday, March 15, at the SXSW Interactive technology conference in Austin, Texas, by Jacob Worrell, IAVA’s Director of User Experience.

The Wait We Carry currently highlights data obtained from more than 1,800 veterans, including those from the post-9/11 wars and older generations, from a survey launched in the fall of 2014. Veterans and veteran family members wishing to add to the dataset can fill out a brief survey linked from the website describing their experiences with VA disability claims and/or experience seeking health care through the VA. 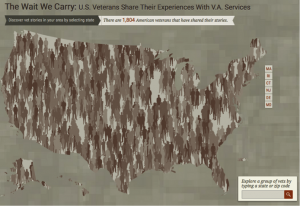 “This stunning new tool takes the average American closer to the veteran experience than ever before, and is another example of how IAVA leads by using cutting-edge technology to tell our members’ stories, ” said IAVA CEO and Founder Paul Rieckhoff. “Almost one year after stories of scandal and alleged wrongdoing within the VA broke in the media, IAVA’s new campaign offers insight into how veterans from all walks of life think about their VA health care. This digital initiative demonstrates the notion that behind every piece of data is a person. Although veterans’ issues may no longer be on the front page, the challenges faced by our brave men and women who wore the uniform remain very real. IAVA thanks Knight Foundation for their generous support. After more than 13 years at war, we want Americans to be aware of the battles veterans face after transitioning out of military service.”

“With this new iteration, IAVA is combining data and technology with rich storytelling to improve the lives of American veterans and their families,” said John Bracken, Knight Foundation vice president for media innovation. “At Knight, we care about how new digital approaches can help make government information more useful, and the information IAVA is presenting is shedding light on a pressing problem.”

The Wait We Carry user experience begins with an emotional opening slide show featuring real quotes collected from survey respondents. Once on the homepage, users are introduced to the map of the United States composed of icons of human silhouettes, each representing a specific veteran respondent. Users can then click on a state, use filters to sort the data by gender, branch, location, and other criteria. Users can toggle between “Disability Claims Process” and “VA Healthcare,” and pull up compelling data breakdowns by “financial stress,” “emotional stress” and “health care quality.”

Most notably, when users click on a silhouette, they are taken to a more personal user interface, which tells that particular veteran’s story. Information may include: health ailments; appointment wait times; location they receive VA healthcare; personal photo; and overall wellbeing. Media requests to contact a particular veteran are funneled through IAVA press office.

As part of IAVA’s #EndtheVABacklog campaign in 2013, IAVA launched its initial version of The Wait We Carry to highlight the more than 600,000 veterans who were stuck in the VA’s disability claims backlog at its peak in March 2013. By definition, a claim must be waiting more than 125 days for it to be considered backlogged. Over the two years since IAVA launched the campaign, the VA disability claims backlog has been cut by more than 60 percent.