NEW YORK, NY (March 20, 2017) –  Today, Iraq and Afghanistan Veterans of America (IAVA), the largest nonprofit, nonpartisan organization representing post-9/11 veterans and their families, announced a new campaign that will focus on changing the culture and standard of care for women veterans. IAVA members and leadership met with Secretary of Veterans Affairs, David Shulkin, to discuss the campaign. 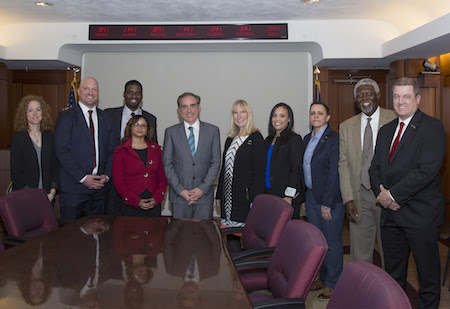 IAVA Founder and CEO, Paul Rieckhoff released the following statement at the conclusion of the meeting:

“IAVA members are grateful to Secretary Shulkin for his time today. Secretary Shulkin has been a long time supporter and partner and we appreciate his leadership,” said Paul Rieckhoff, Founder and CEO of IAVA. “We were pleased to share the highlights of our ‘She Who Borne The Battle’ campaign with him today and look forward to working with him and the administration to increase support for women veterans and for all IAVA members.”

She Who Borne The Battle: More than 345,000 women have served in Iraq and Afghanistan. Women are the fastest-growing segment of the veteran population and that trend will continue as the number of male veterans simultaneously declines over the next five years. However, many female veterans are left without the proper care to support their needs when they return from their service. She Who Borne the Battle will change this by providing a foundation of public awareness, local support and policy changes solely targeted at supporting and empowering female veterans. Learn more at SheWhoBorneTheBattle.org

Storm the Hill: Storm the Hill is IAVA’s signature leadership development program. Over the years, it has grown from a handful of veterans walking the halls of Congress into an annual event placing Iraq and Afghanistan veterans in more than 100 meetings with our nation’s leaders. Learn more at StormTheHill.org