NEW YORK, NY (September 28, 2016) — Tonight at 9PM ET, President Obama will appear at a previously-taped town hall broadcast on CNN focused on issues impacting veterans and the US military. This event continues to build on the national conversation jumpstarted by Iraq and Afghanistan Veterans of America’s (IAVA) historic Commander-in-Chief Forum in New York with Hillary Clinton and Donald Trump earlier this month on NBC that was viewed by over 14 million households.

“CNN anchor and Chief Washington Correspondent, Jake Tapper, will sit down with the President to discuss veterans, national security and foreign policy issues impacting the US military. Obama will field questions from the audience made up of active duty servicemembers, veterans and the military community. The one-hour primetime event will take place in Fort Lee, Virginia, home of the Combined Arms Support Command.” IAVA, the nation’s leading voice for the Post 9/11 Generation of Veterans, encourages it’s members and supporters to watch the event and submit questions online using the hashtag #IAVA.

In recent IAVA member survey, only 20% of IAVA members felt that the President listens to Iraq and Afghanistan veterans. Other survey questions showed equally high levels of dissatisfaction with the performance of the Obama administration, the VA and Congress. The full IAVA member survey can be viewed at www.IAVA.org/research. 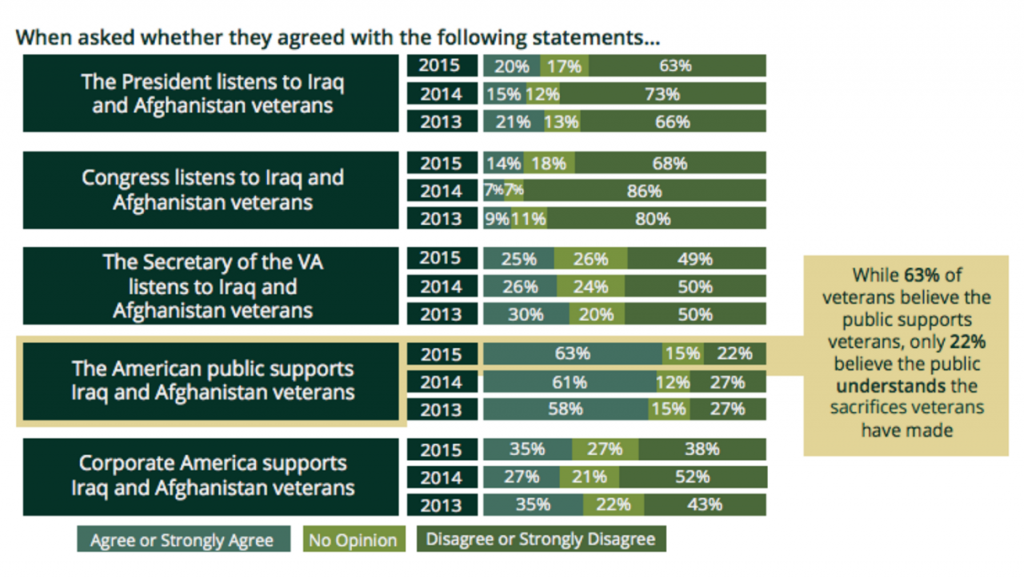 IAVA also looks to CNN moderator Jake Tapper, an anchor experienced on military and veterans affairs, to press the President hard for answers and to listen to veterans questions posted online.IAVA CEO and Founder Paul Rieckhoff and will appear on CNN in the 10 PM ET hour, immediately after the town hall event, to offer reaction and analysis. Rieckhoff also recently sat down with the Washington Post to offer perspective on the Obama legacy for veterans.

In response to the town hall event, IAVA released the following statement:

“It’s good that multiple conversations focused on veterans issues are finally happening. After 15 years of war, an inexcusable VA scandal, a shocking veterans suicide rate and so many other urgent issues impacting our community and our nation, it’s ridiculously long overdue.” Rieckhoff continued,

“Unfortunately, President Obama’s overall record on veterans issues has been a tremendous disappointment riddled with missed opportunities and unforced errors. From late GI Bill checks, to the VA backlog, to secret waiting lists in Phoenix, to the alarming veteran suicide rate, to countless unanswered calls to the VA Crisis Line, the President has consistently failed to hear our calls for help and ended up devastatingly far behind the curve. Most shocking and enduring, the unprecedented 2014 VA scandal was predictable, preventable and revealed massive problems that still plague millions of veterans today. Veterans are not quick to forget that the only cabinet secretary to resign in scandal in the entire Obama Administration was VA Secretary Eric Shinseki. After two terms of disappointment, it should be no wonder that only 20% of our members feel he has listened to them.”

“It is refreshing to see President Obama to take part in this townhall event on CNN, but for most veterans in America, it’s too little, too late. While there and there has been solid progress in select areas like veteran homelessness, passage of the IAVA-led Clay Hunt SAV Act, and the creation of the First Lady’s Joining Forces initiative, this is not time for President Obama to take a victory lap on veterans issues. With only months left in his presidency, this nationally-televised event presents a chance for the President to offer a new vision to finally turn the corner for veterans and commit to a massively increased effort to maximize his impact for our community. This is also an opportunity for the President to finally commit, on the record today, to stand with IAVA and veterans nationwide to #DefendTheGIBill from over $3B in preposterous cuts to our earned educational benefits being proposed by Congress. Finally, we hope the President will commit to continuing to focus on veterans issues with Mrs. Obama after he’s left the White House and for the rest of his life. He may be leaving office next year, but the massive challenges that emerged under his watch will endure for a lifetime. And veterans will need his help for the rest of his.”

For more information on IAVA’s detailed recommendations for the President, all elected officials and candidates and the nation, please see our Policy Agenda. This agenda includes calls for reform measures at the VA, the prioritization of women veterans, cracking down on for-profit schools taking advantage of the Post-9/11 GI Bill, and implementation of the critical measures of the Clay Hunt SAV Act.