IAVA, SPARTA, and MMAA to Host Live Event on LGBTQ+ Non-Discrimination and Inclusivity 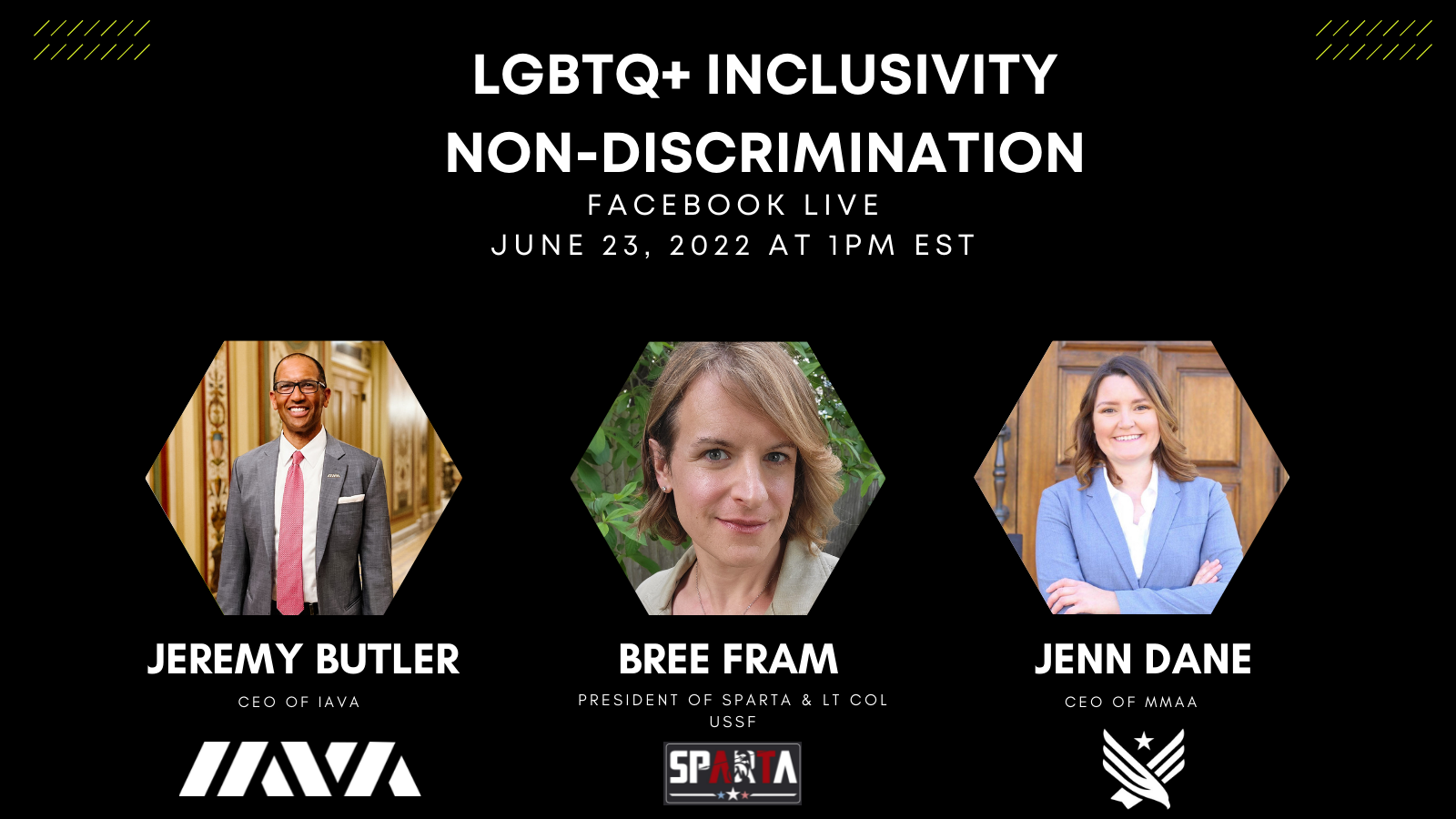 New York, NY – On Thursday, June 23, Iraq and Afghanistan Veterans of America (IAVA) will partner with the SPARTA and the Modern Military Association of America (MMAA) to host a panel discussion on LGBTQ+ non-discrimination and inclusivity.

IAVA’s CEO Jeremy Butler will join Bree Fram, President, SPARTA, and Lt. Colonel in the United States Space Force as well as Jennifer Dane, United States Air Force Veteran and CEO of Modern Military Association of America (MMAA) for a discussion on the Truman Amendment, the Equality Act and the recent Executive order signed by President Biden on advancing equity for the LGBTQ+ community. They will also discuss LGBTQ+ issues related to state and local laws, their impact on military personnel stationed there, and the work still to be done to enable non-binary and gender non-conforming servicemembers to serve their country without the fear of discrimination, and more.

“Since its inception, IAVA has been a leading voice and advocate for the LGBTQ+ military and veteran community, and we look forward to hosting this timely event to discuss important issues impacting veterans,” said Jeremy Butler, CEO of IAVA. “We are grateful to collaborate with Sparta and MMAA to raise awareness and move the needle so that our fellow LGBTQ+ veterans and servicemembers can serve our country without discrimination and with equal treatment to their non-LGBTQ+ counterparts.”

​​“The future of our military must be inclusive. With so much of our recruiting age population identifying as LGBTQ+, we need to have policies in place that support their opportunity to be their best within the military and make a career of service an attractive option,” said Bree Fram, President of SPARTA. “Without that, we’d be deliberately limiting our nation’s potential to fight and win.”“Diversity is a force multiplier and as the nation’s largest nonprofit dedicated to the LGBTQ+ military and veteran community, we have always stood by our statement that everyone who is capable and qualified should have been able to serve in the world’s greatest all-volunteer military,” said Jennifer Dane, CEO of MMAA. “Barriers that are based on discrimination are harmful to not only our country but national security. These barriers must be eliminated.”

This event will provide an overview of the current advocacy efforts for the LGBTQ+ military and veteran community,  highlight current legislation, and summarize the work being done to increase equality and inclusivity. There will be time allotted for questions.

Iraq and Afghanistan Veterans of America (IAVA)  is the voice for the post-9/11 veteran generation. With over 425,000 veterans and allies nationwide, IAVA is the leader in non-partisan veteran advocacy and public awareness. We drive historic impacts for veterans and IAVA’s programs are second to none. Any veteran or family member in need can reach out to IAVA’s Quick Reaction Force at quickreactionforce.org or 855-91RAPID (855-917-2743) to be connected promptly with a veteran care manager who will assist. IAVA’s The Vote Hub is a free tool to register to vote and find polling information. IAVA’s membership is always growing. Join the movement at iava.org/membership.

The Modern Military Association of America (MMAA) is the nation’s largest non-profit organization for LGBTQ service members, military spouses, veterans, and allies. Created through the merger of OutServe-SLDN and the American Military Partner Association, MMAA is a united voice for the LGBTQ military and veteran community.