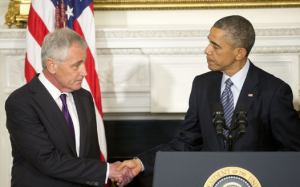 “IAVA members appreciate Secretary Hagel’s exceptional dedication to the veteran community,” said IAVA CEO and Founder Paul Rieckhoff. “As the first Vietnam veteran and former enlisted soldier to lead the Department of Defense, Secretary Hagel was a tremendous advocate for us inside the Pentagon and the Administration. Secretary Hagel was a leader on issues of military mental health, suicide prevention and military sexual trauma, he was always open and receptive to our ideas for reform. He was someone we could always count on to have the backs of our veterans. IAVA members worldwide thank him for his leadership and wish him all the best in whatever he chooses to do next.”

Rieckhoff continued: “The veterans community has had no stronger advocate in Washington than Secretary Hagel. On fighting suicide especially, he’s always had our back. But as Secretary Hagel exits, we look to the President to finally solve a problem that has eluded all previous secretaries: the establishment of a truly seamless health record system between the Department of Defense and Department of Veterans Affairs. This is a critical need for servicemembers and veterans transitioning out of the military and seeking access to mental health care. We look forward to working with the White House and Congress to find a replacement to lead at the Pentagon and strongly support our community in the critical years to come.”