“I appreciated the opportunity to meet with Secretary Wilkie today and discuss those items that we feel are the most urgent to the welfare of the veteran community” said Butler. “While we fundamentally disagree on the need to change the VA motto to one that is inclusive of all veterans, we adamantly agree on the immediate need to address the ongoing crisis of veteran suicide and I look forward to a new opportunity for IAVA to work with the Secretary, his staff, and others in the veteran community to meet this challenge. Our 425,000 members expect us to have a seat at the table when veteran policy is being made, and this is a step in that direction. It is my desire that this renewed collaboration with the VA will also extend to a new opportunity to bring our members’ views to the White House as well.” 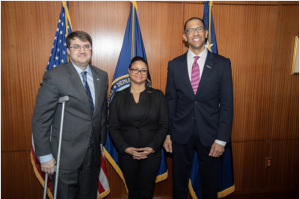 IAVA’s Policy Agenda for the 116th Congress, “A Lasting Legacy” is a road map for America and contains the initiatives and recommendations that IAVA believes will address the most critical issues impacting the post-9/11 generation and improve the lives of veterans nationwide. See it here.