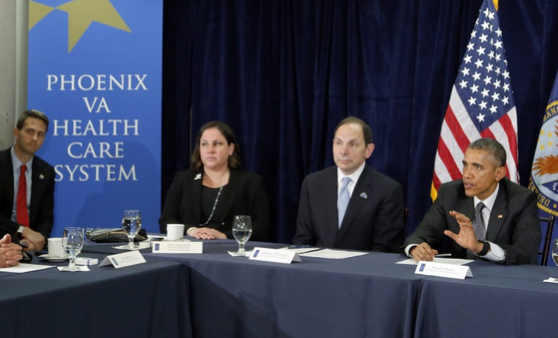 During the roundtable Young talked about the isolation most of the veterans feel when they reach out to RRRP, and the need to have more coordinated, consistent community opportunities for veterans. She also mentioned IAVA’s monthly VetTogethers, veteran community-building events that occur in New York City and across the country, that help transitioning veterans feel connected.

“I thank Commissioner Sutton and First Lady McCray for inviting IAVA to this exclusive event this afternoon,” said Young. “It is encouraging to hear these women discuss their strong support for our city’s newest generation of veterans. As the daughter of a World War II veteran, the First Lady has a unique understanding of what the brave men and women who wore the uniform encounter when they transition home. We look forward to continuing our efforts with the Commissioner to best serve the mental health care needs of New York City’s veterans.”

“Today’s event was a great opportunity to expand IAVA’s partnership with the city as it works to address the needs of our veterans,” said IAVA CEO and Founder Paul Rieckhoff. “IAVA is excited about our ongoing efforts with Mayor de Blasio and First Lady McCray to make New York City the most veteran-centric city in America.”

IAVA is a leading advocate for New York City-area veterans. RRRP, launched two years ago in New York City, helps connect post-9/11 veterans facing transition-related challenges in New York and California to local resources and services. From thinking about school to navigating the VA, or confronting significant challenges like unemployment, financial and legal struggles, or homelessness, IAVA’s veteran transition managers are just a call or email away. For more information, visit www.iava.org/rrrp.