By texting RISING to 741741, veterans seeking help will be immediately connected to a live trained Crisis Counselor. Crisis Text Line’s innovative algorithm triages each case for severity and ensures that texters in imminent risk are addressed first. Through active listening and collaborative problem solving, Crisis Counselors work with the texter to de-escalate their crisis, build rapport, and help the texter come up with a plan to stay safe.

IAVA CEO Jeremy Butler said, “Crisis Text Line will be a lifeline to veterans and service members seeking care for their mental health injuries. Too often, veterans cite stigma and bureaucracy as significant barriers to getting the help they need to address their mental health; Crisis Text Line removes both obstacles in one, with confidential crisis counseling that is free and at the fingertips of anyone who needs a helping hand in their time of need. While this critical service cannot and should not be viewed as a long-term mental health care plan, it will be a lifesaving resource to military men and women navigating the difficult transition to civilian life. Veterans need and deserve long-term comprehensive mental health care, which is why IAVA continues to fight for the swift passage of the Commander John Scott Hannon Veterans Mental Health Care Improvement Act. Even one more life lost to the veteran suicide epidemic is too many.”

IAVA is a long-time advocate for the Commander John Scott Hannon Veterans Mental Health Care Improvement Act, named for a retired US Navy SEAL who died by suicide. This bill will improve mental health care and suicide prevention programs at the VA to include a new VA grant program for communities aimed at finding and treating the 14 of 20 veteran suicides per day who are not under the care of the VA, and a grant program for communities to provide transition assistance. It also increases telehealth, establishes new tracking metrics to ensure that the VA is providing the best possible mental health care possible, and adds new studies to ensure programs are working, such as a study on Vet Centers’ Readjustment Counselors’ efficacy.

Compared to other Crisis Text Line exchanges, texters who self-identify as being a military member or a veteran are:

Suicide amongst our nation’s troops is at the highest rate since the military began tracking data in 2001; an estimated 20 veterans and military members die by suicide every day. In total, over 6,000 military and veterans will be lost to suicide this year alone if current trends hold. Veteran suicide is part of a larger epidemic in this country, and suicide rates have increased in nearly every state in the past 30 years.

As about 8% of the total American population, veterans are disproportionately represented in suicide deaths, representing approximately 14% of the total. About half of all deaths by suicide involve a mental health diagnosis. IAVA members report incredibly high levels of mental health injuries, from 60% reporting PTSD and over half reporting anxiety or depression. 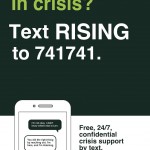