NEW YORK, NY (September 21, 2017) – Today, IAVA leaders and Afghanistan War veterans Tom Porter and Cinthya Fana attended a reception hosted by the President of Afghanistan, Ashraf Ghani. The visit follows President Ghani’s participation at the UN General Assembly in New York City. The reception was an opportunity for President Ghani to meet with veterans, families of the fallen, and servicemembers who have served in Afghanistan, to thank them for their service and share some of the gains Afghanistan has made because of their sacrifices. Porter is a IAVA’s Legislative Director, a Navy veteran who leads all Capitol Hill advocacy focused on issues like expanding veterans education, combatting suicide, and increasing recognition and services for women veterans. Cinthya served five years in the Army as a Human Resources Specialist and deployed to Afghanistan in 2012.

IAVA is the only national veteran service organization headquartered in New York and represents over 400,000 members across America. 37% have served in Afghanistan. 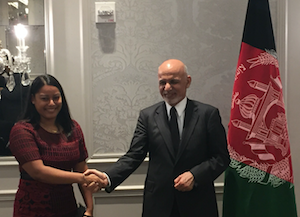 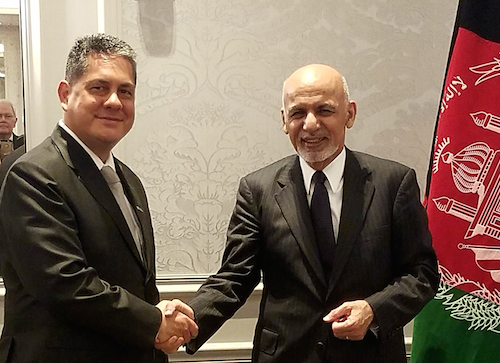 “IAVA is deeply appreciative of the time with President Ghani talking about our common goals and grateful for the warm invitation this evening,” said Tom Porter, Legislative Director for IAVA. “We are proud to join a delegation of veterans in welcoming President Ghani to our hometown. New York is an epicenter of veterans innovation and the place where the bond began for many of us on 9/11. We appreciated an opportunity to share how IAVA is serving veterans in America and to learn more about how President Ghani is serving veterans in Afghanistan. IAVA remains committed to a strong friendship with the people of Afghanistan–and especially our brothers and sisters in the Afghan Army–and to building on the cultural bonds forged through our service in Afghanistan. As many of our members continue to serve in Afghanistan right now, IAVA is proud to work with President Ghani to ensure they are supported and appreciated. IAVA and the Afghan government have established a strong friendship, which recently included meeting with Ambassador Hamdullah Mohib at his home in Washington to discuss our shared past and future. We look forward to continuing this critical, valued friendship with the leadership and people of Afghanistan.”